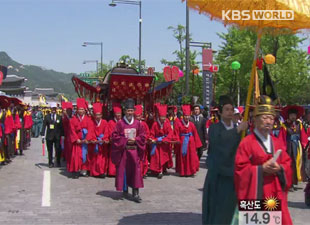 Royal ancestral rituals from the Joseon Dynasty were reenacted in Seoul on Sunday.

Roughly one-thousand-200 people, including those dressed as royal security guards and court officials, followed the king in a procession heading to Jongmyo Shrine.

Citizens and foreigners were fascinated by the scene of the grand ceremony.

During the Joseon Dynasty, the Jongmyo rite was the biggest and most important among the royal family's memorial services for its ancestors.

The rituals and music are on the UNESCO's Intangible Cultural Heritage of Humanity list.