Jun Ji-hyun Cast in 'Snow Flower and the Secret Fan' 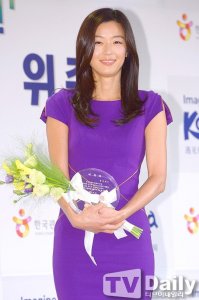 The movie, based on Lisa See's bestselling novel of the same name, will be directed by Wayne Wang, the director of "The Joy Luck Club".

The film, set in remote 19th-century China, features the story of two best friends, Lily and Snow Flower, and their imprisonment imposed by the strict cultural codes of conduct for women at that time.

The book does not openly portray the women's lifelong friendship as a lesbian relationship, but it is said their relationship has sensual overtones and includes a nude scene that shows them writing on each other's chest in a secret language.

Top Taiwanese actress Shu Qi reportedly turned down the role because of the nude scene.

Bill Kong, the producer of "Blood", is known to have helped get Jeon casted in the film.

Zhang, the star of Rob Marshall's 2005 hit film "Memoirs of a Geisha", is also co-producing the film with Wendi Murdoch, the China-born wife of media mogul Rupert Murdoch.

"Jun Ji-hyun Cast in 'Snow Flower and the Secret Fan'"
by HanCinema is licensed under a Creative Commons Attribution-Share Alike 3.0 Unported License.
Based on a work from this source