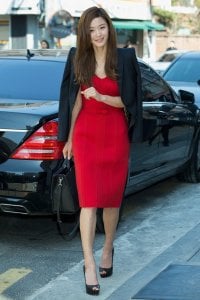 Filming of Blood: The Last Vampire with Jun Ji-hyun in the leading role has begun on March 15, according to the Jeon affiliated Korean studio Sidus HQ. JEON's debut Hollywood project will stay in Argentina's capital Buenos Aires for a month, before moving to China where they are scheduled to film during three months.

The Japanese Animation film of the same title gained cult status after its release in 2002. It lead to several spin-offs, including platform computer games. The protagonist Saya  in the upcoming feature film played by Jeon  is half vampire and half human. Although she has some contempt for humans, she protects them by fighting vampires.

The project is in the hands of the producer Bill Kong ("Crouching Tiger, Hidden Dragon") and director Ronnie YU ("Fearless"). The film is scheduled for release in the summer of 2008.

Hollywood already made acquaintance with Jeon when her successful films across Asia attracted attention. Remake rights for films starring Jeon have been sold to Hollywood studios. Last year's The Lake House was a remake of "Il Mare" and JEON's role was played by Sandra Bullock. A Hollywood remake of JEON's breakthrough film "My Sassy Girl" is under way and this time Elisha Cuthbert is casted for the role originally played by Jeon.

Sidus HQ also announced that Jeon will use the name Gianna Jun outside Asia.

"Jun Ji-hyun Started Filming Blood"
by HanCinema is licensed under a Creative Commons Attribution-Share Alike 3.0 Unported License.
Based on a work from this source