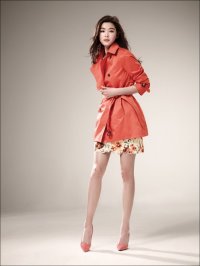 Many Korean star actresses of the small screen have dismally flopped in movies although they achieve brilliant success and earn astronomical amounts of money in TV commercials. Now Jun Ji-hyun is taking the gamble, returning to the silver screen with "A Man Who Was Superman" directed by Chung Yoon-chul.

She follows in the perilous footsteps of Kim Tae-hee , who recently appeared opposite Sol Kyung-gu in "Venus and Mars". It attracted a mere 300,000 viewers amid controversy over Kim's poor acting skills, which have been in question since her debut.

Ko So-young, whose beauty defies age, was also unlucky in films. Her movies "A.P.T" and "Go Go Sister" were both failures. And Moon Geun-young, once considered the queen of the small screen and the nation's little sister, fell flat on her face with "Love Me Not". After a long rest, she announced her return to TV soap opera.

Song Hye-kyo, meanwhile, did not meet the expectations of fans in the movie Hwang Jin Yi, although her performance was slightly better than those of some fellow actresses and it drew 1 million moviegoers. But that was not enough for the producer to make profit from the production, which cost W10 billion (US$1=W937).

Jun Ji-hyun is well aware of what she is up against. In fact, she has been there before, with the failure of "Daisy" two years ago. So the new movie is clearly a critical juncture in her career: that is why she chose to work with director Chung Yoon-chul and actor Hwang Jung-min, both renowned for their superb achievements.

But the road ahead is not easy. "A Man Who Was Superman" will be released on Jan. 31, coinciding with other potential blockbusters like "Once upon a Time", "Radio Dayz" and "The Devil's Game". Will she be able to break the jinx?