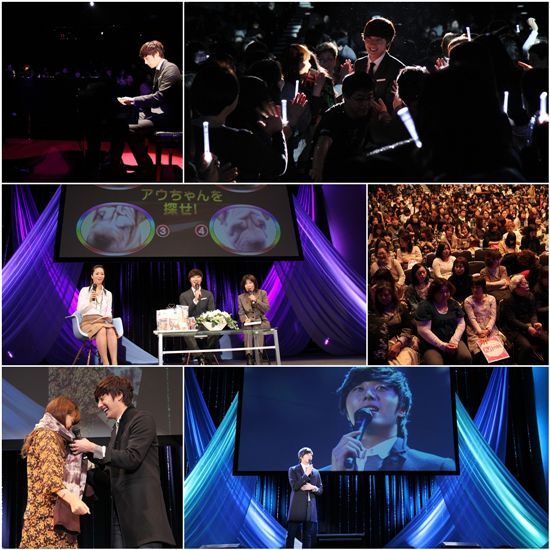 Still shots of Jung Il-woo at his fan meeting in Japan [N.O.A Entertainment]

Korean actor Jung Il-woo met with thousands of fans for his second fan meeting in Japan over the weekend.

A press release from his agency N.O.A Entertainment announced Monday that Jeong flew into Japan on November 6 and held his fan meeting at the Yamano Hall to celebrate the launch of his official fan club in the country the next day.

He opened the fan meeting with a performance of playing the song "love affair" on the piano and sang Kim Gun-mo's "You and Me Again" and Japanese singer Kuwata Keisuke's "Winter Lovers".

The 23-year-old heartthrob also held a special event for his fans in naming his official fan club, where he choose the name "Flying Up' and awarded the winning fan with a handmade scarf and tee-shirt that he designed.

"Just thinking about meeting my fans for the first time in a year and four months and after setting up my official fan club makes me excited. It feels like the three hours that we spent was such a short time", Jeong was quoted as saying.

He ended the fan meeting by shaking the hands of each individual attendee as well as hold a holding a photograph and autograph session.

Jeong made his debut with a role in the movie "The World of Silence" in 2006. He became a household name after starring in the MBC sitcom "High Kick!" and since then appeared in several dramas including "Iljimae Returns - Moon River" and "My Fair Lady".