Jung Il-woo, how does he maintain his complexion? 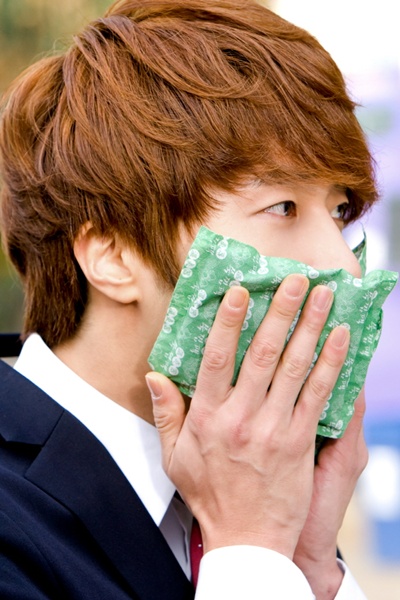 Jung Il-woo from tvN's "Flower Boy Ramyun Shop" always has his handy hot pack with him.

Currently in the lead of cable TV dramas in the same time slot, "Flower Boy Ramyun Shop" Jung Il-woo has made the handy hot pack his new best friend on the set.

A still that was revealed on November 21st shows him with the handy hot pack on both his cheeks. Although he plays stuck up and rich executive Cha Chi-soo in "Flower Boy Ramyun Shop", even he can't fight the cold. The hot pack seems to melt away his bad temper as well.

Regarding Jung Il-woo, the crew says, "He is wearing a lot of uniforms in this drama and he must be cold but he doesn't really care. In the Kangwondo region where the cold has become extreme, he pulled off a pajama scene with no difficulties. He is very professional and encourages the staff around him to cheer up and work hard".

Those who have seen him with the hot pack in his hands say, "Good work in this cold weather!", "Is the herb hot pack the secret to his flowery complexion?", "I need to send him a box of handy hot packs!" and more.

Meanwhile, the next plot development of "Flower Boy Ramyun Shop" is widely anticipated by viewers as it started a romance between Jung Il-woo, Lee Chung-ah and Lee Ki-woo from its very first episode.

"Jung Il-woo, how does he maintain his complexion?"
by HanCinema is licensed under a Creative Commons Attribution-Share Alike 3.0 Unported License.
Based on a work from this source