Jung Jae-young and Park Bo-young, "You Call It Passion" 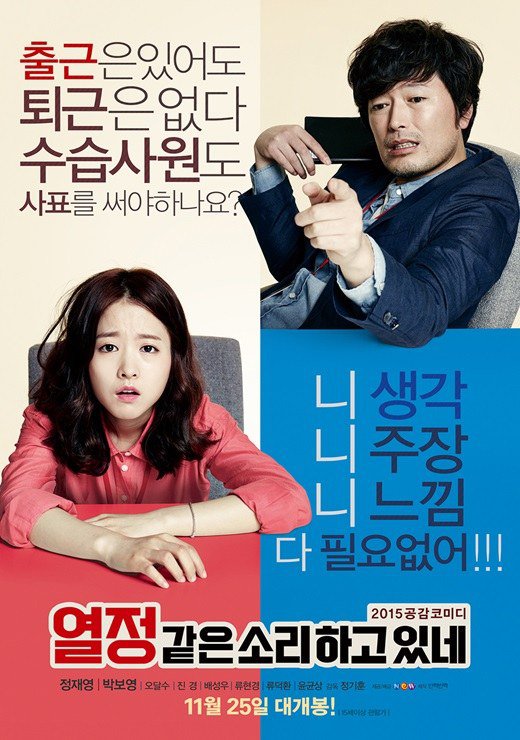 Actor Jung Jae-young and actress Park Bo-young lived the lives of social reporters in the movie "You Call It Passion".

"You Call It Passion" spends time on the characters in the beginning but then moves on quickly. Do Ra-hee (Park Bo-young) spends 4 years in university and become a celebrity news reporter. She gets paid 900,000 won a month without a day to rest, but she learns to adjust. She goes from neat hair and high heels to sneakers and jeans.

Jung Jae-young plays Ha Jae-gwan, the celebrity news department head. It's interesting, the way he portrays his character. He breaks his phone from the beginning of the movie and isn't happy with the rookie reporter Do Ra-hee. He also likes to use the word 'passion' and says it's the answer to everything.

Jung Jae-young acts out his character realistically. He swears a lot and digs for exclusives obsessively but shows affection for his junior reporters. The way he tries to protect them humanely.

Do Ra-hee covers news about super star Woo Ji-han (Yoon Kyun-sang) when she realizes his management has problems. Extremities have been used in the process of finding out the problem but it was necessary as a movie. However, Woo Ji-han had a disappointing ending.

Jung Jae-young and Park Bo-young's relationship is that of any workers in a company out there and relates to the audience. Bae Sung-woo also stars in the movie as a realistic character named Seon-woo. Jin Kyung is the director of Woo Ji-han's management and Oh Dal-soo stars in the movie as himself, Oh Dal-soo, director of the broadcasting station.

"You Call It Passion" is a comedy about Do Ra-hee meeting her superior Ha Jae-gwan who is a time bomb. The movie comes out on November 25.

"Jung Jae-young and Park Bo-young, "You Call It Passion""
by HanCinema is licensed under a Creative Commons Attribution-Share Alike 3.0 Unported License.
Based on a work from this source