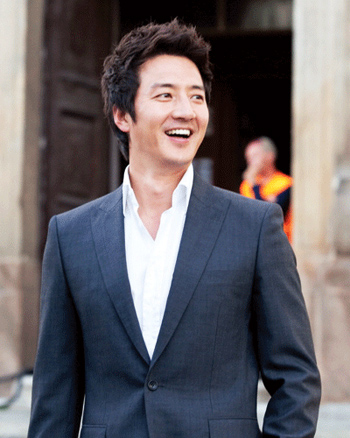 Actor Jung Joon-ho (41) will marry MBC announcer Lee Ha Jeong (32) on March 25 at the W Hotel located in Kwangjang-dong. A spokesperson to Jung Joon-ho said on February 10, "Jung Joon-ho had recently confirmed the wedding date and made reservations at the wedding hall. The wedding official and the host will be decided later".

Jung Joon-ho is now staying in Japan for a fan meeting and will make an official announcement about his wedding after coming back to Korea around February 13. Jeong and Lee first met last November when the announcer Lee Ha Jeong had visited the film set of the drama "Queen of Reversals" -- in which Jeong appeared -- to interview Jeong, and they had become a couple afterward. The interview aired as a feature of MBC TV'S "Six O'Clock News" entitled "The People Lee Ha Jung Meets". Jung Joon-ho had said during a previous interview with Yonhap News, "We have not seen each other for a long time, but how long we have known each other does not matter at all. She is a very nice person".

Lee Ha Jeong joined MBC in November, 2005 and had hosted the children's program "Kiss Kiss Kiss" and "Learning Korean". Jung Joon-ho debuted in 1995 through open recruitment at MBC, and he has enjoyed huge popularity with his appearances in movies such as "My Boss, My Teacher" and "Marrying the Mafia" and dramas such as "IRIS" and "Last Scandal".

"Jung Joon-ho: 'I Will Marry Lee Ha Jeong on March 25'"
by HanCinema is licensed under a Creative Commons Attribution-Share Alike 3.0 Unported License.
Based on a work from this source