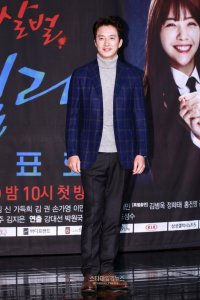 "Jin Sa-woo can control diverse feelings. This character brought about a turning point in my acting career", says actor Jung Joon-ho, 39, who plays a spy in the KBS TV drama "IRIS". Jeong's role contrasts sharply with his previous comical roles in "My Boss, My Teacher" and "Last Scandal".

Jeong's acting talent shines in the action scenes of "IRIS". We met with Jeong on the filming set of the drama at a shopping mall in southern Seoul. "I'm having fun because I can show a new side of my acting talent, and the drama itself is huge", said Jeong.

Jeong looked kindly and even playful when he had just entered the set, but when he appeared with makeup completed, his look perfectly represented his character, Sa-woo, who agonizes over killing his friend.

Jeong has also lost significant weight since he started filming the drama. He said, "I've lost 5 kg recently. Sa-woo is going through a roller coaster of emotions now. He's very anxious. I lost weight to better portray him. There is no stopping him now that he has killed his friend because that was his agency's order. It was the order of Director Baek San, who will probably become very scary later".

In episode 6, Sa-woo fired a gun at a jet with his friend, Hyun-joon (Lee Byung-hun), on board. It is the biggest crisis of Sa-woo's life and the reason he changes as a personality. Jeong said, "He has committed something really huge, because if he hadn't shot Hyun-joon, Seung-hee would have been hurt. When I saw the script I wondered if a person can do this even when someone from above orders it. It was hard to portray this. But it's just a drama. It's a drama about an organization of cool-headed people. So I just accepted it and acted".

Jeong added, laughing, "If I were Sa-woo, I would never do that". In the beginning, Jin Sa-woo was more cold-blooded than he is now. Jeong has infused his character with a human touch, making "IRIS" more riveting.

He said, "Sa-woo is a more rational, shrewd and reasonable guy than he seems to be. He does his best to beat Hyun-joon, who is always a step ahead of him. But since "IRIS" is a drama with a grand scale and all of its characters are too stiff, I wanted to add a human touch to it. What Sa-woo said to Hyun-joon at the nightclub was entirely ad-libbed by me. I wanted to make Sa-woo look more down-to-earth. He acts more proactively because now he and Hyun-joon have no other choice but to part ways".

What makes the cool-headed Sa-woo more down-to-earth is that he is unable to utter a word in front of Seung-hee, who he fell in love with at first sight. Jeong said, "Sa-woo can't speak properly in front of a woman he loves. He has lost to Hyun-joon even in love. But now that he believes that Hyun-joon has died, he wants to get everything under his control in order to feel justified. But what he feels for Seung-hee now is not love, but compassion".

Jeong says an actor must thoroughly manage his character to become a genuine actor. He said, "In that respect, I was unable to engross myself completely in acting. Though acting is my profession, acting is just a part of my life. I have so many other things to do, like business and personal relationships. That's why I was unable to thoroughly manage my character. That's also the reason I played comical roles several times. I couldn't turn down those offers".

He continued, "But this time I'm working with Lee Byeon-heon, who does his utmost to manage himself as an actor. He made me realize that if I don't manage my characters, viewers might feel betrayed by me. But that doesn't mean that my values have changed. I'm trying to invest all of my energy into this drama. You don't get a chance to act in such high-profile dramas every day, plus my role is really interesting. Promptness is a must in TV dramas because of time restraints. You need to remain highly focused until the last minute".

Jeong, who runs film production and advertisement companies as well as a hotel in Hawaii, says that he enjoys doing business. He has been a successful entrepreneur up to now because he has received much help from others. He said, "I want to combine business with acting in the future as well. But since I'm not that young anymore, I need to focus on quality rather than quantity".

As for his plans to get married, Jeong says he will get married next spring or as soon as he meets the right person.