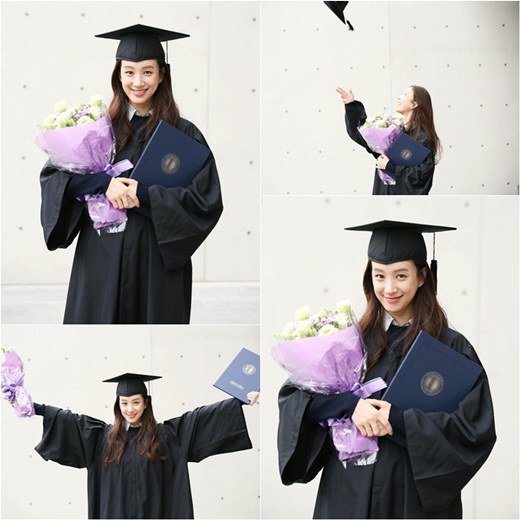 Jung Ryeo-won is currently starring in the new tvN drama "Bubble Gum" as Kim Heng-ah, a radio producer whose parents passed away early but lives life to the fullest.

Jung Ryeo-won is completely consumed as Kim Heng-ah, even with the props. Pictures of Kim Heng-ah's graduation were taken recently. Jeong put on a robe with a bouquet of flowers in one hand and her graduation certificate in the other. She seems happy as she throws her graduation cap in the air.

She looks stunning in a graduation robe. Her fair skin and clear features come together well to make her look like a goddess. In addition, her long hair makes her the iconic 'innocent college girl'.

The pictures were taken on the 23rd of September. She was a natural at it and believed she was Kim Heng-ah throughout the whole time.

Apparently, Jeong is always carrying around her scenario and analyzing her character. Her meticulous and well-prepared personality makes her the perfect Heng-ah.

Meanwhile, on the twelfth episode of "Bubble Gum", Ri-hwan (Lee Dong-wook) and Heng-ah reunited again. Heng-ah held onto Ri-hwan who was about to leave and told him that she was just taking the time to think things through between them. On the other hand, Ri-hwan had just turned around without a word just in case he broke down in front of her. The two of them reunited in the end".

The thirteenth episode of "Bubble Gum" can be seen on the 7th at 11PM.

"Jung Ryeo-won's goddess-like graduation pictures "
by HanCinema is licensed under a Creative Commons Attribution-Share Alike 3.0 Unported License.
Based on a work from this source