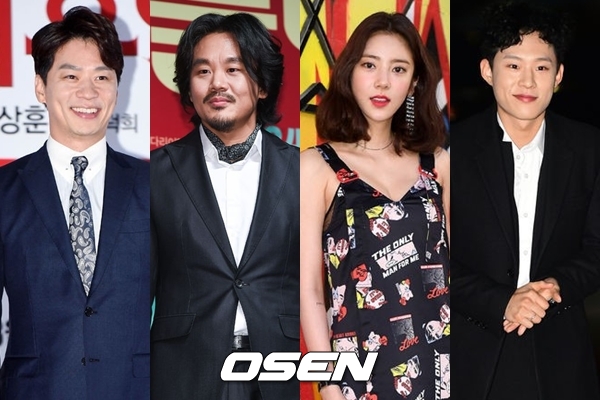 Jung Sang-hoon, Kim In-kwon, Son Dam-bi, and Kim Sung-cheol have been courted for the movie "That Night".

Jung Sang-hoon from the movie "Gate" made a reputation for himself in "Woman of Dignity", which led to a role in "My Husband Oh Jak-doo" and finally in "That Night".

Kim In-kwon turned into an action star in the movie "Revenger" and this time he's appearing in the black comedy "That Night".

For Son Dam-bi, this is her first leading movie. She was last in "The Accidental Detective 2: In Action" with Kwon Sang-woo and Sung Dong-il that is coming out this year. She's made appearances in dramas "Lights and Shadows", "This Is Family", "Mrs. Cop", and more.

Kim Sung-cheol from the tvN drama "Prison Playbook" is a rising star who will also be in "That Night". Some of his past works are plays "Romeo and Juliet", "Sweeny Todd", "Fan Letter", "My Bucket List", and more.

"That Night" is director Park Jin-young-II's first black comedy about a group of people meeting in a suicidal café and it starts filming in March.

"Jung Sang-hoon, Kim In-kwon, Son Dam-bi and Kim Sung-cheol Join "That Night""
by HanCinema is licensed under a Creative Commons Attribution-Share Alike 3.0 Unported License.
Based on a work from this source