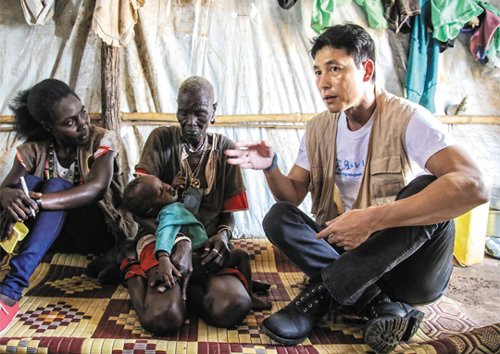 Actor Jung Woo-sung (right) talks with refugees at a camp in South Sudan on May 21. /Courtesy of the United Nations High Commissioner for Refugees

Actor Jung Woo-sung met refugees in South Sudan on May 20 and consoled them.

This was his second visit to a refugee camp after one in Nepal. Jeong has been working to raise awareness on the humanitarian crisis as an honorary advocate for the United Nations High Commissioner for Refugees since May last year.

"I lived in a shanty town until I was in middle school", Jeong said. "I even left home at a young age because I hated living poorly. But I think being poor is nothing to be ashamed of".

Jeong shared Korea's history of overcoming poverty with the refugees, telling them "Korea received help from many countries after the Korean War, and now it helps other countries".

He added he hopes they "have big dreams and are not ashamed of getting help".

"Jung Woo-sung Meets Refugees in South Sudan"
by HanCinema is licensed under a Creative Commons Attribution-Share Alike 3.0 Unported License.
Based on a work from this source