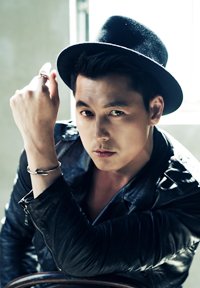 Actor Jung Woo-sung, 39, has been selected the new face of outdoor fashion brand, The Redface.

According to a statement released by the company on Tuesday, Jeong, who recently starred in the television drama "Padam Padam... The Sound of His and Her Heartbeats", will represent the brand for one year.

"Jeong has such a wide fan base of people of all ages and his name itself gives confidence to customers", the company said. "He has everything he needs to become the new model of the brand including his voice as well as his look".

The "hallyu" (K-wave) star made his debut in the movie "The Fox with Nine Tails" in 1994 and rose to stardom with director Kim Seong-soo's film "Beat" in 1997. He has since appeared in a number of box office hits such as "A Moment to Remember" in 2004 and "The Good, the Bad, the Weird" in 2008. He has also won various awards including the Popularity Award at the Blue Dragon Film Awards in 1999, Best Dresser of the Year at the Korea Fashion & Design Awards in 2008 and Style Icon Actor at the Style Icon Awards in 2009.

The Redface, established in 1966, has positioned itself as a reputable outdoor fashion brand in Korea, known for its high quality mountain-climbing gear. The company started manufacturing apparel and outdoor products such as tents and backpacks since its merger with RF Trading Co. in 2000.

"Jung Woo-sung selected as model for Redface"
by HanCinema is licensed under a Creative Commons Attribution-Share Alike 3.0 Unported License.
Based on a work from this source