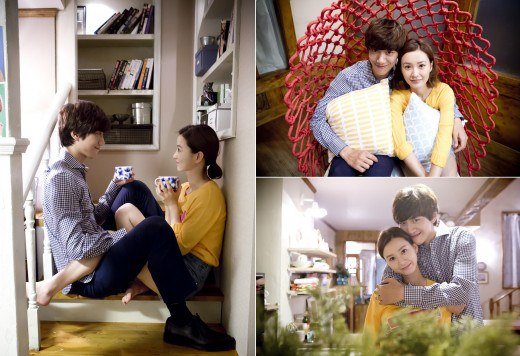 They co-star in the new KBS 2TV drama "Discovery of Romance" as Han Yeo-reum and Nam Ha-jin, a couple in their second year. The pictures of them revealed prior to the actual broadcast show their intimacy. They are sitting together on the stairs and drinking coffee or have their arms on each other's shoulders. They are looking at each other with such happy faces.

Apparently, they didn't care about the eyes around them as Jung Yu-mi and Sung Joon shot these scenes. They acted like they were real lovers and they looked lovely.

"Discovery of Romance" starts with the appearance of Yeo-reum's ex-boyfriend Kam Tae-ha (Eric Mun). This drama deals with the excitement, passion, jealousy and anger between men and women.

"Jung Yu-mi and Sung Joon sit tangled together "
by HanCinema is licensed under a Creative Commons Attribution-Share Alike 3.0 Unported License.
Based on a work from this source