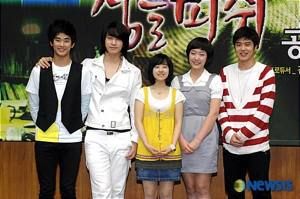 A Jungle Fish is a fish that lived in the African beach but was dropped into the jungle by a whirlwind. It hints at the situation of present-day youth who suffer from entrance exams to return to the beach (the future).

The form of the drama is solving the scandal with a personal blog. It will also be like a documentary, using real clips from news and internet videos, and street interviews.

Park Bo-young, who was the younger version of Ku Hye-sun in SBS "King and I" and Min-ji of the movie "Forever the Moment" will star. Hwang Chan-sung from MBC sitcom "High Kick!" and singer Kim C will also join.

It will air early May.

""Jungle Fish" accuses realities of entrance exams"
by HanCinema is licensed under a Creative Commons Attribution-Share Alike 3.0 Unported License.
Based on a work from this source