JYJ - what's next in the future? 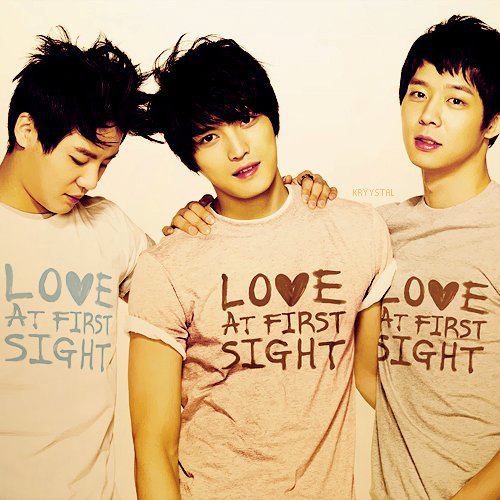 We witness many groups birth moments. Some of these groups are successful, some are less successful. Some are hyped to the absurdity level, and some are hardly recognized. The recent success of JYJ's first Korean-language album, that is In Heaven, prompted few companies to line up with CF offers. Not only companies. They are faces for many other organizations (including infamous now Jejudo promotions) and spokespersons for various activities that take place around Korea.

I praised this trio countless times, and even if someone is not a fan of their music, it's simply impossible not to cheer for them nonetheless. They started in DBSK and with DBSK they achieved everything they could. After the splitting, they became homeless but with solid base of supporting fans (maybe the best is Blessing Yoochun, a community of mostly women age 30+ who usually donate a lot for those in need, having boys as their example) that can turn everything with "JYJ" logo on it into pure gold. Yet this huge potential of the biggest DBSK fanclub of the world, namely Cassiopeia, wasn't used to its fullest. TV Broadcasts refused to invite any of the boys to their shows. "Miss Ripley" never got even one coverage on entertainment shows.

So now moving into the main point. They started off as "idols". I partially despise the word that classifies a singer as something less worthy than "singer", but partially have to agree. They are somewhat "idols" to those teenagers who can faint because said idol looked straight into the camera during the broadcast, and poor girl is sure he looked JUST at her. Well, I wrote many things on fangirls, so it's no use. But they are idols also because of fashion, and endorsements. Everything that a certain idol wears becomes a hit "he drinks XX drink, so I will drink it too, even though it stinks like salty water". Therefore - they truly are idols. Plus, they may be idols for someone to develop oneself in a certain direction, but usually such serious topic is mercilessly ignored in various fandoms.

We have witnessed DBSK birth moment, the JYJ drama-llama was taking place just before our eyes recently, but now, we are witnessing something else. A transition from idols to artists.

I'm not saying idols can't be artists, but it works on a totally different level. Except for Woolliment, no company allows their kids to compose their own tracks, and even if they do, usually such songs are put on some B-sides. Kim Jae-joong composed during DBSK days, but those songs weren't promoted as smash hits. Now, they do all themselves, and this independence makes them stand out against the industry. Their songs are raw, that's true, both in emotions they convey, words or music. But they are honest. I think this will slowly reflect in the industry and big agencies allow their idols compose their own songs or at least parts of them.

Oh, with sarcasm I may presume that SM Entertainment will soon issue the statement in which they will tell us that the splitting was in fact approved by them. I bet they will soon feel proud as parents of such brilliant prodigy, trying to get credits for JYJ's success. They'd do have a grain of truth in this - they trained them. But it's not like they made the racing horse out of a donkey. They just found diamonds and polished them. That's all.

Junsu has landed two roles in musicals that were enthusiastically welcomed by the audience (hard to tell, was it because of the production values or Junsu himself). And as the sworn admirer of musicals I liked them a lot (Mozart! and Tears of Heaven). He also was given the cameo in "Scent of a Woman" drama and he was cute. Kim Jae-joong had one supporting role in Japanese drama last year and now he was starring in "Protect the Boss". The most versatile and successful up to date is Park Yoo-chun, who had two leading roles in both "Sunggyungwan Scandal" and "Miss Ripley", and lately flew to Thailand for a fanmeeting. Plus, he composes as well.

They will solidify their fanbase in Europe with two November concerts – in Spain and Germany. Will this cause the change inside Korea? I really don't know. Lately new obstacle appeared, and at first it looked like a bad joke. One of their songs, "Pierrot" wasn't approved by KBS broadcast, because it contained ominous initials P.S.M. And although the composer of the lyrics, Kim Jae-joong, explained what is hidden behind those letters, KBS arbitrary guessed what it could mean without asking for explanation. Hence the banning. The JYJ drama is now airing, and we can watch it live.

This proves that idols, or whatever you call them, don't need to appear on TV to achieve success. It's all about the fans and talent that has to be presented. Also, JYJ case is the proof that the protectorate of the big agency is also not necessary. This is also the reason why I'm looking out for younger groups. I'm tempted to guess how long JYJ will remain JYJ, but "maybe-ing" is opium for the brain, it causes only pleasant delusions and nothing more. One is sure, slowly the "idol group JYJ" will be replaced by "JYJ" with the artist hint.

This article is the result of merging few others:

"JYJ - what's next in the future?"
by HanCinema is licensed under a Creative Commons Attribution-Share Alike 3.0 Unported License.
Based on a work from this source