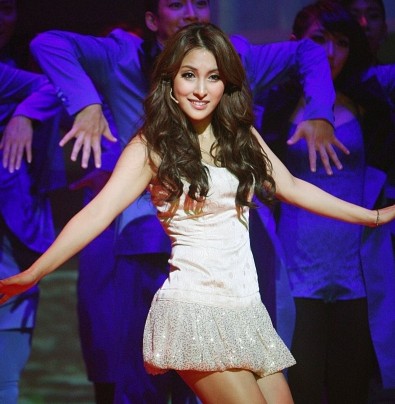 Kara is one of Korea's top idol groups.

And Kara's Gyu Ri is making her debut in the musical world through "200 Pounds Beauty".

[Interview : Gyu Ri, Member Kara] "This is my first musical. It's something I've wanted to do ever since I was a child".

As a singer in an idol group, Gyu Ri is a little worried about performing in a musical.

[Interview : Gyu Ri, Member Kara] "I'm still lacking in many ways, and I have a lot to learn, but I'll do my best to show improvements in the future".

Starring Gyu Ri, Bada, Oh Man-seok and Lee Jong-hyuk, the musical "200 Pounds Beauty" will be staged until February of next year.

As we near the end of another year, various charity events are being held with celebrities.

It kicked off with the performance of JYJ's Kim Jun-su dressed in a dandy suit.

And then T-ara wowed the audience.

He was awarded with a valuable crown, which he donated for auction.

[Interview : Jang Keun-suk, Actor] "This says "World Star". I've been dreaming about these words ever since I was a child. I'll continue to challenge myself until my last breath. Thank you".

It was a beautiful and meaningful moment of sharing, created by Korea's jewel-like Hallyu stars.

has been appointed as an honorary ambassador.

He is in charge of promoting the Nuclear Security Summit that will be held in Seoul next year.

[Interview : Jang Keun-suk, Actor] "It is such an honor for me to represent this important national event despite my young age".

As a new honorary ambassador, he'll be engaged in various activities.

And we look forward to seeing them!

For two days, the singer held two concerts at the Olympic Gymnastics Arena.

The concert kicked off with an exciting DJ performance,

after which Lee Seung-gi sung his hit ballads like "Let's Break Up" and "Words that are Hard to Say".

We're sure that he'll remain loved for countless years to come.

Lee Ju-no, a member of the legendary group Seotaiji & Boys that dominated the 90s,

will be marrying his 23-year-younger girlfriend early next year.

He announced the happy news when he proposed to his girlfriend while recording a TV program.

All that is left is their wedding, which will take place soon.

The couple is expecting a child early next year.

Congratulations on your marriage! We hope you live happily ever after!

I certainly loved watching that movie 200 pound beauty so how awesome is it that it's going to be a musical.
I just love Lee Seung-gi and I'm so glad he's performing on stage with his new songs.