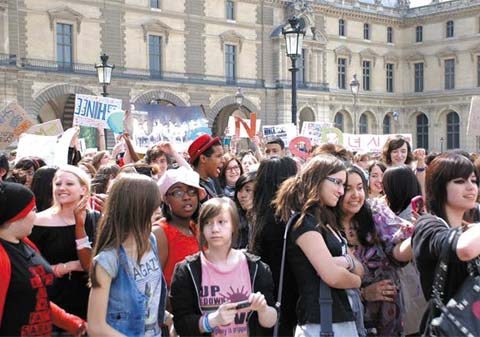 Fans demonstrate in front of the Louvre Museum in Paris on Sunday demanding an extra K-pop concert after tickets to a scheduled event sold out. /Yonhap

Hundreds of French fans gathered in front of the Louvre Museum in Paris on Sunday demanded an extension of a Korean pop concert, symbolizing the spread of the Korean Wave beyond Asia and into Europe.

Around 200 diehard K-pop fans picketed while dancing to Korean pop tunes for over an hour in front of the museum, demanding that a concert by TVXQ, Super Junior, Girls' Generation, SHINee and f(x) scheduled for June 10 be extended for another day.

The 6,000 tickets for the concert sold out in just 15 minutes online. SM Entertainment, the organizer, is considering an unscheduled additional concert on June 9 to reward the enthusiasm of the French fans.

K-pop is popular in other European countries including the United Kingdom and Germany as well. On Feb. 25 this year, British teens formed a 200 m long queue in front of the Korean Cultural Centre in Trafalgar Square to see the first K-pop concert hosted by the centre. Around 700 fans were in line to watch the concert, including from Scotland, 600 km away. British teens surprised cultural centre staff by imitating dance moves by K-pop groups such as Big Bang, 2NE1 and Super Junior and singing their songs in Korean.

What is it the appeal to European teens? One French teenager who said she is an avid fan said, "K-pop stars can sing and dance well and they have perfect faces and bodies. They make great music videos, so when you watch that you get addicted to them and watch them again and again". Websites like YouTube have played a huge role in bringing K-pop to Europe. Diehard French fans have created websites where visitors can download K-pop music videos and TV dramas featuring the artists.

K-pop has captured the attention of the European media. Early this year, French state-run broadcaster France 2 featured a documentary called "Korea, Hidden Strength" about K-pop stars and their lives. The BBC reported last Tuesday that the Korean Wave has spread past Asia to Europe and the U.S. "While conglomerates such as Samsung and Hyundai still form the backbone of the country's financial structure, many people now believe that the Korean national brand itself is changing to reflect this new passion for Korean Wave", the BBC said.

"K-Pop Arrives in Europe"
by HanCinema is licensed under a Creative Commons Attribution-Share Alike 3.0 Unported License.
Based on a work from this source