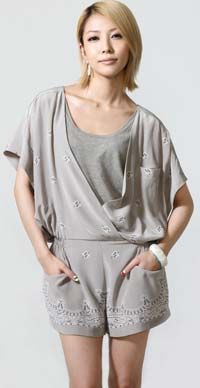 After Stevie Wonder wowed fans with his popular tunes, powerful vocals and unforgettable stage presence, local K-pop groups are following suit with a festival to keep the musical wave high and flowing.

SM Entertainment, one of the main agencies here, responsible for some of the most popular stars including BoA and Girls' Generation, is holding SM TOWN LOVE '10 World Tour in Seoul beginning on Aug. 21.

Staged at the main stadium of Sport Complex, Seoul the six-hour event boasts a lineup of the cream of the crop.

BoA, who has recently returned to the local K-pop scene with her new number "Hurricane Venus", will aim to dazzle fans with her talented vocals and dance moves. The 23-year-old singer has proven her star power in Korea and Japan. Despite not doing as well as she had hoped in the United States in 2009, she is still a fan favorite thanks to her charisma and considerable experience as a top singer despite her young age. Fellow singer Kangta, and also an older performer in the SM stable, will join BoA to impress fans with his balladic tunes. The 30-year-old has been busy performing in Japan and China and he is returning home to greet local fans.

SM Entertainment was one of the first to produce large groups, starting with the now disbanded band H.O.T, and mega groups such as the nine-member Girls' Generation and 13member Super Junior. They will be on hand to join their seniors on stage.

SHINee and f(x), relatively younger artists, are also expected to blow the crowd away with their funky tunes and enviable dance routines.

Other special highlights include a pairing of Yunho and Maxx from TVXQ, while BoA will perform a duet with SHINee's Key. Super Junior's Kyu-heon and Seohyun from Girls' Generation will get together for a special sequence, while sisters Jessica from Girls' Generation and Krystal from f(x) will also collaborate and show off some sisterly love and talent.

With more than 80 songs on the program for the concert, fans will also get to watch actors under the SM label relax and show their playful sides at the event. Actors Kim Min-jong, Go Ara and Lee Yeon-hee will appear on stage alongside the singers, promising a day of sound, excitement and entertainment.

The concert will continue to Los Angeles, Tokyo and Shanghai throughout the year.

The SM TOWN LOVE '10 World Tour in Seoul will be held on Aug. 21 at the main stadium, Sports Complex, Seoul. All tickets cost 88,000 won. For more information, visit Open the link

For fans looking for a more interactive performance, attend the Brand New Concert featuring top pop groups on Aug. 20.
Without the loyal, cheering fans in the audience, there would be no purpose for a big performance, and this concert has been arranged as a two-way concert for both the audience and performers.

Spectators will not only get to watch their favorites stars including 2AM, B2ST, Brown Eyed Girls and Kara but they will also be given the chance to show their appreciation and devotion to the singers at the event. Instead of the usual concert format where the singers perform and the fans cheer them on, concert organizers have explained that it will be a more interactive show where everyone gets to participate.

While the singers will sing their recent hits, they will also get together and arrange joint performances. While Jo Kwon from 2AM and Son Ga-in from the Brown Eyed Girls announced that they were working on a new song for the event, all artists will be on stage together to sing the song "A Goose's Dream".

As a meaningful goal for the event, organizers also announced that the proceeds will be donated to patients suffering from cancer.

Singer BoA is back with a new album and a hit song titled "Hurricane Venus", and she is expected to wow the crowd at the SM TOWN LOVE '10 World Tour in Seoul, Aug. 21. /Courtesy of SM Entertainment