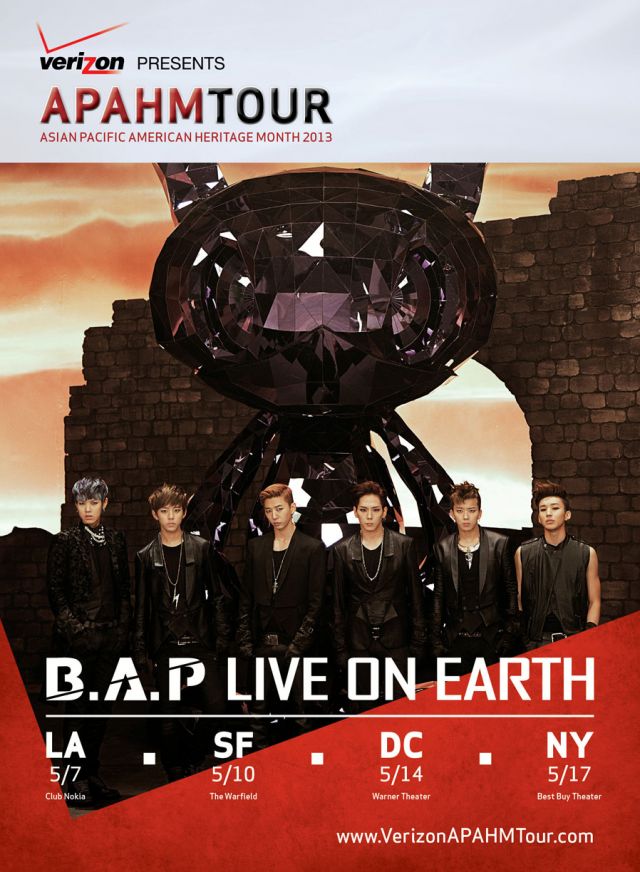 This Spring, Verizon Wireless will team up with Mnet America (www.mnetamerica.com), a youth entertainment brand for all things Asian cool, to present this year's Asian Pacific American Heritage Month (APAHM) Tour – B.A.P "Live on Earth". The four city tour, headlined by one of the most popular up and coming K-pop groups in the world, B.A.P, will take place in the first half of May traveling to Los Angeles (5/7), San Francisco (5/10), Washington D.C. (5/14) and New York (5/17). Mnet America is producing the tour which will include concerts and also fan meet-ups in each city. Tickets to what will be a highly anticipated concert will go on sale April 6 at 12 p.m. local time.

"As a sponsor of KCON and our Pre-Grammy Party and through this concert series, Verizon Wireless has been one K-Pop's biggest supporters as the Korean Wave continues to make a splash across the U.S". said Ted Kim, CEO and President of Mnet America. "B.A.P is going to prove again that K-Pop is a powerful force across cultures, with Asian and non-Asian fans alike".

B.A.P, also known as Best. Absolute. Perfect, is bringing their infectious R&B infused hip-hop stylings to North America on their first solo world tour, "Live on Earth" after receiving much success recently on the international charts. Just in the past few months they have reached #1 on Billboard's World Album Chart and topped iTunes Hip-Hop Album downloads in the U.S. and Canada with their new EP "One Shot". More details about venue locations and exclusive opportunities to meet B.A.P through Verizon promotions will be announced soon.

Mnet (www.mnetamerica.com) is a youth entertainment brand for all things Asian cool. It uses video, digital, experiential and social media to reach Millennials with lifestyle content inspired by Asian pop culture and entertainment. This includes the first and leading 24/7 English-language television network in the U.S. targeting fans of K-pop music, anime and other genres of entertainment growing in popularity throughout Asia and around the world. An advertiser-supported network –distributed in over 30 DMAs through Comcast Cable, Time Warner cable, FIOS TV, Cox cable, Charter Communications and via TV Everywhere – Mnet is the first U.S. television property of CJ Entertainment & Media Group, Asia's leading vertically-integrated entertainment company and a unit of CJ Corporation. Mnet is headquartered in Los Angeles, can be found on http://www.facebook.com/MnetUSA, on Twitter @MnetLA and on Tumblr http://mnetamerica.tumblr.com/

"K-Pop Continues its North American Invasion"
by HanCinema is licensed under a Creative Commons Attribution-Share Alike 3.0 Unported License.
Based on a work from this source