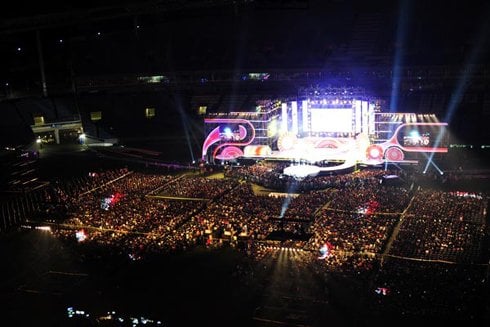 The nation's largest K-pop festival took place at Munhak World Cup Stadium in Incheon on Sept. 9. Organized by the Incheon city government, the concert was held to promote the host city of the 2014 Asian Games and boost its tourism industry and the regional economy. Admission tickets to the annual concert were provided free of charge.

The Munhak World Cup Stadium in Incheon is packed with fans for the nation's biggest K-pop festival on Sept. 9.

The venue of Incheon K-Pop Concert 2012 was packed with K-pop fans from home and abroad. Information booths and dedicated entrances were set up to help spectators from foreign countries, including Asia, France, Spain and the U.K., and foreign guides were on hand to make sure things went smoothly. 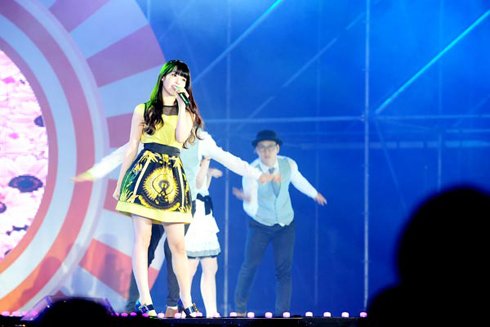 IU sings at the concert on Sept. 9.

The concert began shortly after welcoming remarks by the city mayor at 7 p.m. With Onew and Key of boy band SHINee serving as hosts along with actress Min Hyo-rin, the three-hour show proved a smash hit and featured top stars such as Kim Tae-woo-I, BoA, IU and Kara. The 40,000-strong audience roared at the appearance of each performer and bore placards emblazoned with the names of their favorite singers. 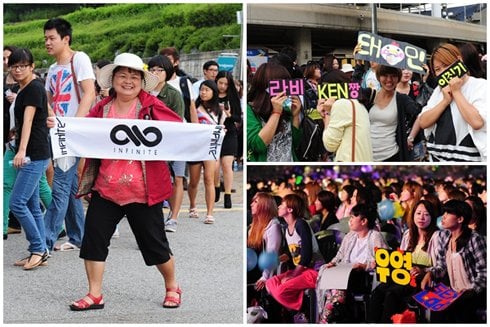 Foreign fans queue for the concert.

The weather turned chilly as the night progressed but the crowd's level of enthusiasm remained undiminished until the show wrapped up at around 10 p.m. Capping the night, fireworks painted the sky a rainbow of colors and spectators filed out of the venue still humming K-pop tunes.

"K-Pop Festival in Incheon Promotes 2014 Asian Games"
by HanCinema is licensed under a Creative Commons Attribution-Share Alike 3.0 Unported License.
Based on a work from this source