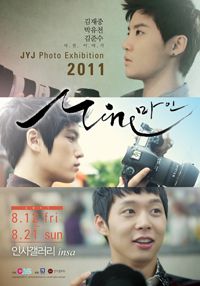 Photos taken by members of the K-pop group JYJ will be on display from Aug. 12 to 21 at Insa Gallery in Jongno-gu, Seoul.

Titled "Mine", the exhibition will feature photos of the three members ― Kim Jae-joong Je-jung, Park Yoo-chun and Jun-su ― taken during their world tour and during regular daily life. The photos were taken by all three to offer a glimpse of how they spend their time and of their lifestyles.

Still in dispute with their former agency, the group is having difficulties getting scheduled to appear in television shows.

"JYJ successfully finished their world tour, visiting 10 cities, but there was no chance to share the results with the public. So we planned a photo exhibition for fans, both domestic and overseas", C-JeS Entertainment said.

The agency said it will later publish a book of the photos.

Currently, Kim Jae-joong Je-jung is starring in the drama "Protect the Boss" and Jun-su performed "You Are So Beautiful", the theme song for the drama. Park Yoo-chun is taking a rest after completing the drama "Miss. Ripley".

Entrance costs 5,500 won. Tickets must be purchased in advance at www.c-jes.co.kr.

"K-pop group JYJ to hold photo exhibition"
by HanCinema is licensed under a Creative Commons Attribution-Share Alike 3.0 Unported License.
Based on a work from this source