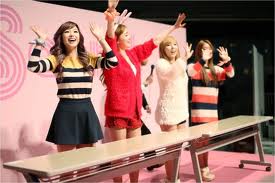 According to TS Entertainment, "Secret" are to perform in Osaka on Monday, Nagoya on Wednesday and Tokyo on Thursday.

The group, during the concert titled ""Secret" Time", will present its hit songs such as "Madonna", "Magic" and "Shy Boy" and solo performances by its members.

"It is "Secret"'s first solo performance since its debut two years ago", the agency said in a release. "The group will show its best". (Yonhap)