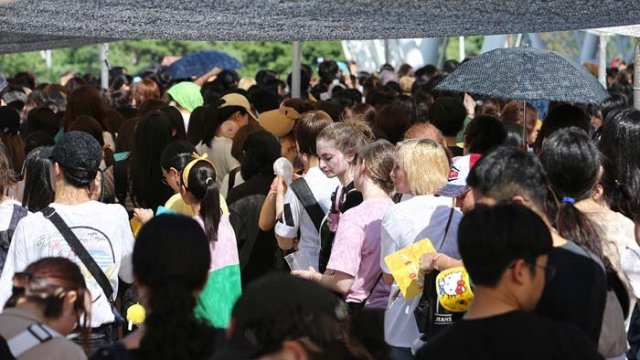 Fans queue for a K-pop concert in Seoul on Sunday.

It seems that nothing can stop Japanese fans' love of K-pop, as it remains intact amid growing tensions between Korea and Japan over trade and historical issues. K-pop stars and music continue to thrive in Japan, with concerts sold out and album sales setting new records.

SM Entertainment held three days of concerts in Tokyo on Aug. 3-5, featuring top stars in its stable including EXO, Red Velvet and TVXQ. A total of 150,000 fans packed the concerts, posting photos and videos in real time on social media.

Tickets for girl group Iz One's tour of four Japanese cities, which will start off in Chiba on Aug. 21, almost sold out. TWICE, who enjoy huge popularity in the island country, will stage concerts in seven Japanese cities from October. Boy band Seventeen will also tour Japan in October and November.

Album sales are also strong. BTS have sold more than 1 million copies of their Japanese singles album "Lights/Boys with Luv" since its release there early last month, the Recording Industry Association of Japan said last Friday. They are the third K-pop act after BoA and Girls' Generation whose album sales have exceeded the 1 million milestone in Japan.

TWICE released two Japanese albums last month, and both have sold over 250,000 copies. As of Monday, boy group GOT7 ranked second on the Oricon weekly album chart with their latest mini album "Love Loop".

"Regardless of the escalating spat between Korea and Japan, K-pop idols are still popular in Japan", said a staffer at an entertainment agency. "We were worried at first that it would be like the Chinese boycott of Korean goods, but it doesn't seem to have affected cultural exchange, since both are culturally advanced countries".

"Japanese people tend to separate culture from politics and they enjoy K-pop as part of culture", said Prof. Lee Gyu-tak at George Mason University Korea. "K-pop musicians, who have many hardcore fans, are not affected much".