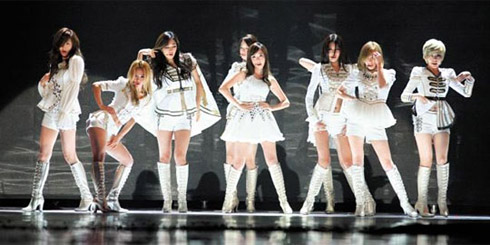 Girls' Generation perform at the Mnet Asian Music Awards in the Singapore Indoor Stadium on Tuesday. /Courtesy of CJ E&M

MAMA is hosted by cable channel Mnet, and the recipients of the awards are chosen based on the votes of fans around the world, as well as input from a panel of experts.

Ooh La La Session, the winner of this year's Superstar K3 competition, also made an appearance. The band's ailing leader Lim Yoon-taek, who is battling stomach cancer, said, "I was able to go on stage as my health improved. We sang on behalf of the 1.97 million people who came to the Superstar K3 audition".

Fans completely filled the 10,000 seat-capacity stadium and cheered and danced to the songs of the honored artists. Hundreds of fans gathered around outside of the stadium before the awards ceremony started to watch the stars arrive, with a huge crowd forming in the hotel lobby where the K-pop stars were staying.

"K-Pop Singers Lauded at MAMA Awards in Singapore"
by HanCinema is licensed under a Creative Commons Attribution-Share Alike 3.0 Unported License.
Based on a work from this source