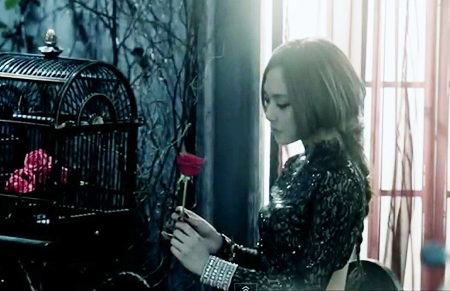 A promotional image for the album "Touch" shows Fei, memebr of multinational girl group Miss A. (Courtesy of JYP Entertainment)

Currently, K-pop programs are filled with new faces such as Sunny Hill, or B.A.P., but that is about to change. Many groups are returning to the stage here in the coming weeks after wrapping up their schedule abroad or dedicating their time to new albums.

Boy band Big Bang will climb out of its incident-filled slump with the mini album "Blue" on Feb. 29.

The song "Blue" was the first of the seven-track album to be released Wednesday. The list of the entire album is released, but YG Entertainment, the groupagency, labeled every song of the album except for the intro as "title track".

"Usually only one song is designated to represent an album. This time, we wanted to give equal weight to all the songs that the band worked very hard for", said an official at YG. How this approach will affect the five-member band's schedule is undecided. "We are still figuring out how to execute this plan. The goal is to give the fans as much opportunities as possible to fully enjoy all songs".

Last year was a tough one for the K-pop group. In November, G-Dragon, the leader, had an indictment suspended by the Seoul Central District Prosecutors' Office after being questioned on charges of smoking marijuana.

Another member, Daesung, was investigated after he ran over a 30-year-old man lying on the road before crashing into a parked taxi on Yanghwa Bridge on May 31. The prosecution cleared Dae-sung of charges for causing the death due to a lack of evidence.

Following the release of the mini album, the group will embark on a world tour "Big Bang Alive Tour 2012". Starting with shows in Seoul Olympic Park from March 2 to 4, Big Bang will perform in 25 cities in 15 countries. The group recently shot the music video for "Blue" and "Bad Boy" in New York.

Miss A, a four-member girl group from JYP Entertainment, released its mini-album "Touch" on Monday. It includes six songs - "Touch", "Lips", "Rock n Rule", "No Mercy" and "Over U". The title track "Touch" is a catchy song about a heart break produced by Park Jin-young, the president of the agency. Upon release, it ranked number one in various music listings in the country such as Melon, Bugs, Mnet and Olleh Music. The music video is an experimental work that uses psychedelic images as well as frequent zooming techniques that accentuates the choreography. Incorporating sets and attire from the aesthetics of Shanghai in the 1980s, the footage manages to bring out mature beauty from the four young members. The video topped a Chinese music chart Yin Yue Tai on Monday. Miss A will be performing on channel Mnet's "M Countdown" today.

Rock-inspired K-pop group CNBLUE will be returning home in March after a successful year in Japan. Their second single in Japan "Where You Are" ranked number one on the Oricon Chart in January, as the first foreign artists since Canadian rock band Mashmakhan in 1971. On March 9, CNBLUE will perform in LA with F.T. Island, another K-pop group.

Ballad group 2AM from JYP Entertainment will break its long overdue silence at home on March 13 with a new release. This return marks their first full length album since October 2010. The single "Saint O'Clock" released in Japan in January sold over 50,000 copies. Jeong Jinwoon, the youngest member of the group, is starring in the KBS 2TV sitcom "Dream High".