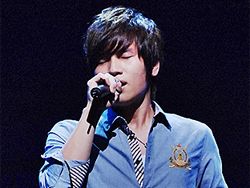 Ballad singer K-Will was diagnosed with H1N1 influenza, becoming the second Korean celebrity to contract the disease. His agency Starship Entertainment said that K-will has been suffering from high fever since three days ago. At first they thought he just had a bad cold from working many nights in a row, but when his condition worsened he visited the hospital where he was confirmed of having been infected with the new flu. The release of his second album originally slated for October 22nd has been postponed because of his health. K-Will's agent said that the singer is being admitted to the hospital and his schedule is being put on hold until he gets better.

K-Will has become the second Korean celebrity to be infected with the new flu, following Kim Hyun-joong of SS501, who got the disease while on an overseas promotional tour. Kim was visiting Japan early last month to promote his drama "Boys over Flowers" when he was admitted to a hospital in Tokyo for H1N1 flu. Kim has completely recovered from the illness and is getting ready for the release of a new mini album on October 22nd.