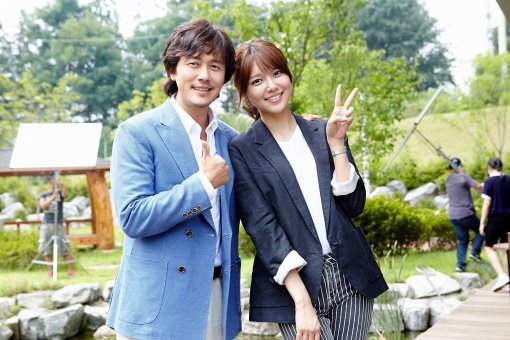 A still cut of Kam Woo-sung and Choi Soo-young was revealed.

The two of them star in the new MBC drama "My Spring Days" as Kang Dong-ha and Lee Bom, who fall in destined love for each other.

Kam Woo-sung takes on the role of Kang Dong-ha, a single daddy with two children who loses his wife to an accident and CEO of a stockbreeding industry called Hanuraon. He falls in love with the woman who received his wife's heart through a heart transplant.

Choi Soo-young plays Lee Bom, a woman who is attracted to the man whose wife gave her the heart. Born new with a new heart, Lee Bom thinks she's living someone else's life and tries to live to the fullest. Choi Soo-young has established a good base in acting through "Love Manipulation: Cyrano", "The 3rd Hospital" and more.

"My Spring Days" is a human drama based on the subject of 'Cellular Memory' where a beneficiary is also given the habits or personality of the donor. A woman gets a new chance at life and meets the family of the woman who gave it to her. To be broadcasted in September.

"Kam Woo-sung and Choi Soo-young in upcoming drama "My Spring Days""
by HanCinema is licensed under a Creative Commons Attribution-Share Alike 3.0 Unported License.
Based on a work from this source