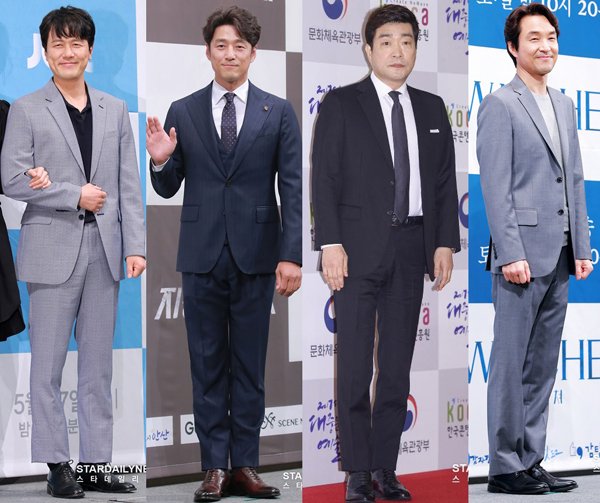 There are more than enough dramas to watch these days starring creditable middle-aged actors.

The dignified veterans we are talking about are Kam Woo-sung, Ji Jin-hee, Son Hyun-joo and Han Suk-kyu.

They are centralizing dramas as leading characters and holding the balance. Their presence alone raises the quality of the work and serves as a strong role for the production team and a role model for the younger actors.

Kam Woo-sung starred in the jTBC drama "The Wind Blows" and made many people cry with Kim Ha-neul, his co-star, as well as Ah-ram, the character of his daughter. The tears he cried delivered the ardent and sad emotions and made viewers tear up.

The tears that came out of his eyes overshadowed his determination to die if he crossed the line after meeting Soo-jin and Ah-ram, in the midst of loneliness and despair while thinking about his wife and daughter.

Kam Woo-sung put on a great performance with Kim Ha-neul in every episode and made the drama look very convincing.

Ji Jin-hee in the role of acting president of the Republic of Korea is making viewers think differently about him.

As the episodes for tvN drama "Designated Survivor: 60 Days", which began on the 1st of July, continue, the viewer ratings increase, and the audience is deeply drawn to the point where they don't know how time goes by.

The thrilling content and solid acting skills of the cast have the viewers' attention. Among the cast members, Ji Jin-hee's performance as the main character, Park Moo-jin, stands out beyond anyone.

Ji Jin-hee shows the perfect character and is being praised for his irreplaceable acting skills, while most say this might be his best performance yet. In the drama, which aims for human values without political desires or preconceptions, Ji Jin-hee's image quickly captivated viewers with his new leadership. Viewers are very eager to have a leader like the one in the drama, and the character is receiving great acclaim by giving viewers a sense of vicarious satisfaction.

Han Suk-kyu is back for the first time and with strong force. He is starring in the OCN original drama "WATCHER" as Do Chi-kwang, an investigator who keeps an eye on his fellow police.

"WATCHER" is a psychology drama in which three men and women whose lives were destroyed by a tragic incident become a police internal corruption investigation team and dig into the true nature of power. It is a psychological thriller about a special investigation that closely pursues the multifaceted nature of humans behind the incident.

Han Suk-kyu's role of Do Chi-kwang is suspicious of all his fellow police officers, realizing that the harm is great when the police commit an illegal act in the wake of a tragic incident. As an inspector monitoring his colleague, he meets Kim Yeong-goon (Seo Kang-joon), a policeman, and begins to approach the truth of the incident 15 years ago.

Son Hyun-joo stars in the KBS 2TV drama "Justice" as the bad guy, this time. "Justice" is a social thriller about Lee Tae-kyeong (Choi Jin-hyuk), a corrupt lawyer who has joined hands with the devil for revenge, the devil being Song Woo-yong (Son Hyun-joo), a man who chose to become evil for the sake of his family. The drama reveals the dark underbelly of Korea's VVIPs.

Son Hyun-joo plays Song Woo-yong, the chairman of a small and medium-sized construction company. He goes back and forth between being evil and a loving father, and gives off a force that overpowers his opponent with fierce eyes, and a look of breathtaking charisma.

"Kam Woo-sung, Ji Jin-hee, Son Hyun-joo, Han Suk-kyu, The Dignity of Veterans"
by HanCinema is licensed under a Creative Commons Attribution-Share Alike 3.0 Unported License.
Based on a work from this source