Kang and Song say bonded like brothers in "Secret Reunion" 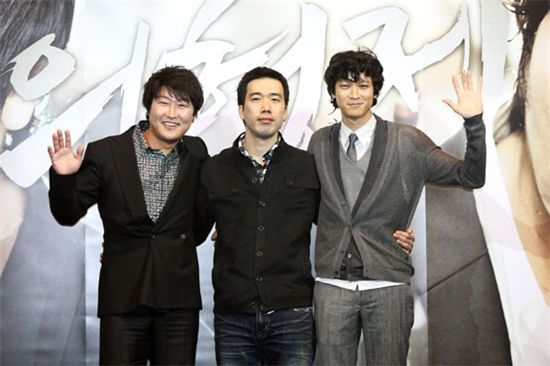 Song Kang-ho keeps throwing verbal jabs which makes the audience burst out in laughter. Gang Dong-won wears a complex, multi-layered look in his eyes that has not been seen in any of his previous films. From what has been revealed at the press conference for "Secret Reunion", held at Seoul's Megabox Multiplex on Tuesday, "Secret Reunion""Secret Reunion" not only maximized the strengths of the two actors but also took an unexpected turn. The character Han-gyu, a former NIS (National Intelligence Service) agent who now runs a detective agency, appears to be a mixture of Song's two previous characters -- the NIS agent in "Shiri" and the middle-aged mobster in "The Show Must Go on". But his remarks in the movie go far beyond just being funny lines spoken by a character -- it's as if the actor and the character have become one. And one can see in the close-up shots that Gang Dong-won -- who looks as slick as a deer even when he's wearing suits that have long gone out of fashion -- carries in his eyes the intensity of a North Korean spy who is immensely conflicted between his ideology and his emotions.

With issues like the North-South division and marrying immigrants entangled in the story, "Secret Reunion" is to no extent a light movie. But even during the pursuit scenes between the NIS and the killer or action scenes with a Vietnamese organization, one cannot help laughing at the humor created by the gap felt between the seriousness of film's theme and what one actually sees on the screen. The film "Secret Reunion" -- which Song Kang-ho confidently described as "made so well that it makes me blush" -- opens in theaters on February 4. The following is an excerpt from the Q&A session held after the press screening.

Q: "Secret Reunion" deals with the division of North and South Korea, but the movie feels more comical than serious. What kind of movie were you trying to make?
Director Jang Hoon (Jang): An NIS agent and a North Korean spy get abandoned by their government agency but meet again six years later. The story started with what could happen when these two meet again. The movie is serious before they see each other again, but the tone of the film lightens up after they meet. I think what makes it entertaining is the comical parts surrounding two men living together and the ensuing drama when they start understanding each other. 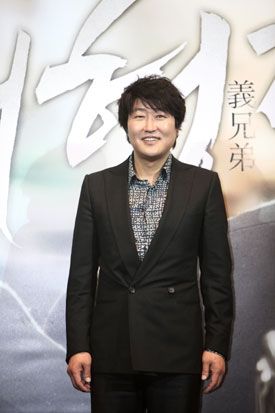 Q: In the case of Song Kang-ho, you have appeared in movies that dealt with the North-South division such as "Swiri" and "Joint Security Area JSA". "Secret Reunion" also deals with the subject but it approaches the issue in a different way than your other films did.
Song Kang-ho (Song): The reality hasn't changed -- the country is still divided as it was ten years ago. But I think there's been a change in our awareness, like our thoughts about the division having changed over the years. It's not our fundamental thoughts that have changed but our attitude in accepting reality. "Secret Reunion" is very different from "Swiri". I wouldn't call it light but maybe you could say it deals with reality in a sophisticated way. In the past, we were educated under the circumstances like the division and the military regime and were even taken advantage of. But I think people have become more free-spirited now and they accept the reality as it is.

Q: Since the film is about the process of two very different men becoming brothers, the actors must have communicated a lot as well.
Gang Dong-won (Kang): I talked a lot with Song Kang-ho after we finished filming the movie. I told him about my problems and I'm grateful because I think he instilled confidence in me. I'm sure this isn't true but he told me, "I wasn't as good as you when I was your age. You're doing really well". That compliment really invigorated me.
Song: There is a large physical age gap between us but surprisingly, Gang Dong-won is an actor who thinks a lot and deeply about life and his acting. So much that his nickname on the set was "old man". (laugh) I envied the fact that he is a deep thinker and expresses himself honestly, and if he uses those traits in his acting, I think he could be a really great actor. We had fun shooting the film and we had good chemistry. We look so different that the title of the film [translated into "Sworn Brothers" in English] didn't feel right in the beginning but there was talk on set that we were starting to look alike... I'm just kidding. (laugh) 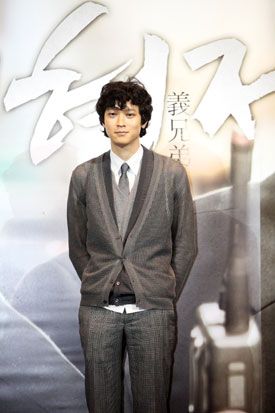 Q: Was there a special moment in the movie when you felt like you were really brothers, like your characters Han-gyu and Ji-won?
Song: The two of us went out for drinks and talked a lot. Gang Dong-won is a really funny guy. He looks like a typical [Korean province] Gyeongsang-do guy who doesn't talk much and isn't very friendly, but when you get to know him you see that he's a very funny storyteller. But there's a depth to his stories and I could tell that he was a young man who was raised well in a good family. I found his personality to be just as attractive as his looks. (To Kang) What would be our special piece of memory?
Kang: I once went to Busan to see Song Kang-ho and he fell asleep in the room while we were drinking. So I woke him up and started drinking again... (laugh) Nothing special happened but we had a lot of conversations. I think we talked about anything and everything.

Q: You still have a Gyeongsang Province accent -- did it bother you while you were playing your character as a North Korean spy?
Kang: I used to worry about my accent but I stopped caring from a certain point on. I talked to Song Kang-ho about this and he told me not to worry about it too much. He said, "Your emotions is what matters when you're acting. If the audience says something about your accent, it means your acting wasn't good enough. We talk to express our characters' emotions but if they're noticing the accent first, then it means you didn't deliver your emotions well enough". 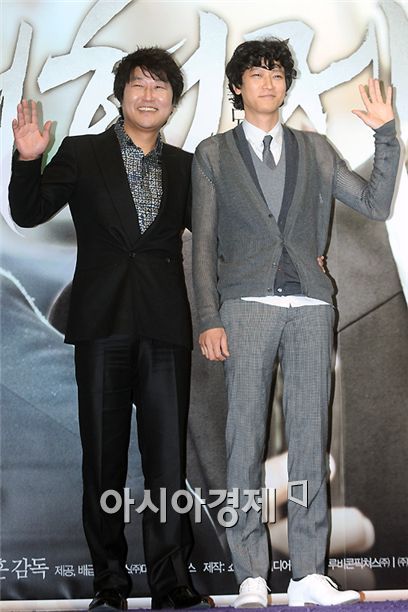 From left, actors Song Kang-ho and Gang Dong-won pose during a photo session of a press conference for film "Secret Reunion" held at the COEX Megabox Multiplex theater in Seoul, South Korea on January 19, 2010. 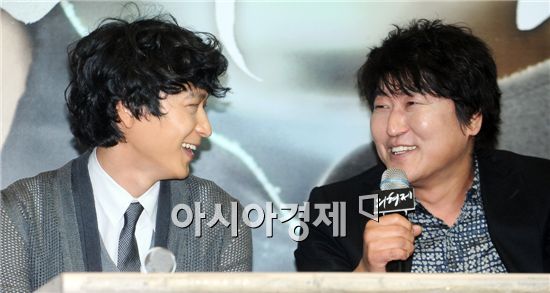 From left, actors Gang Dong-won and Song Kang-ho laugh during a press conference for film "Secret Reunion" held at the COEX Megabox Multiplex theater in Seoul, South Korea on January 19, 2010. 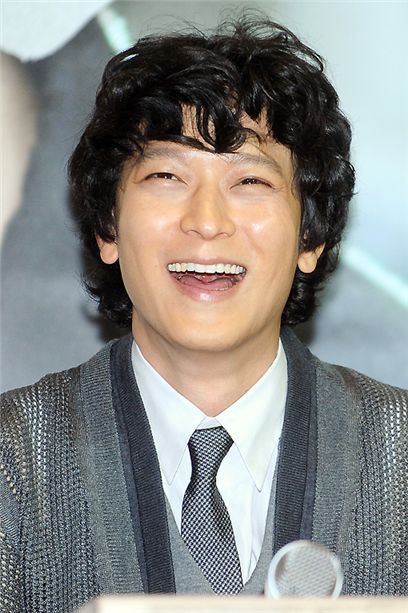 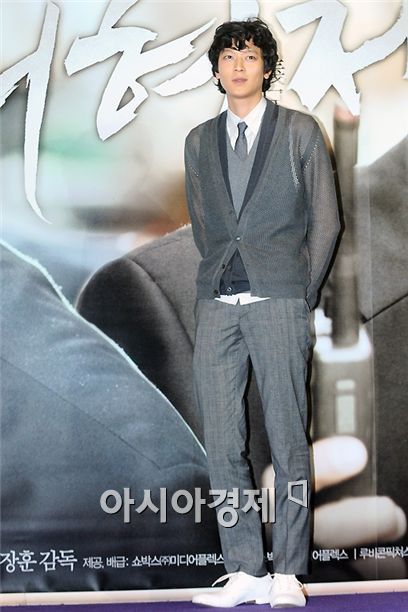 Actor Gang Dong-won poses during a photo session of a press conference for film "Secret Reunion" held at the COEX Megabox Multiplex theater in Seoul, South Korea on January 19, 2010. 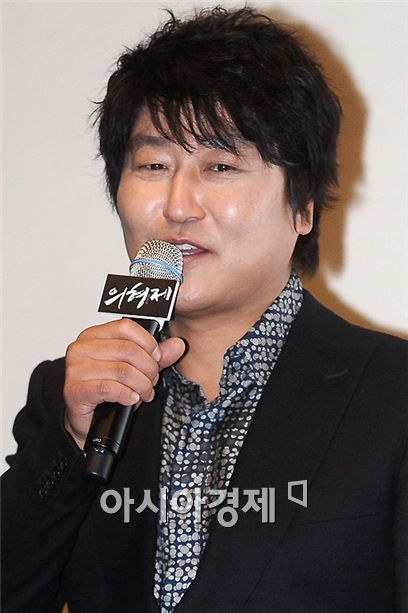 Actor Song Kang-ho poses during a photo session of a press conference for film "Secret Reunion" held at the COEX Megabox Multiplex theater in Seoul, South Korea on January 19, 2010. 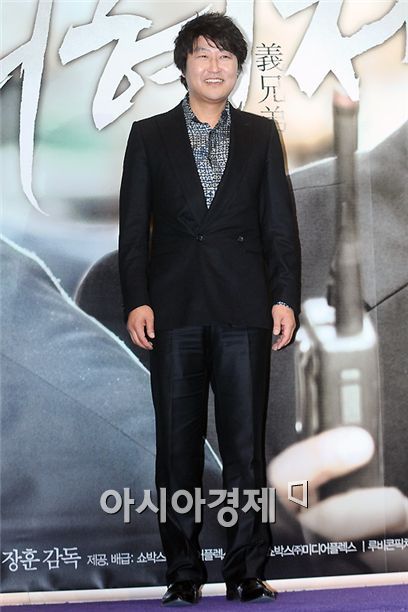 "Kang and Song say bonded like brothers in "Secret Reunion""
by HanCinema is licensed under a Creative Commons Attribution-Share Alike 3.0 Unported License.
Based on a work from this source