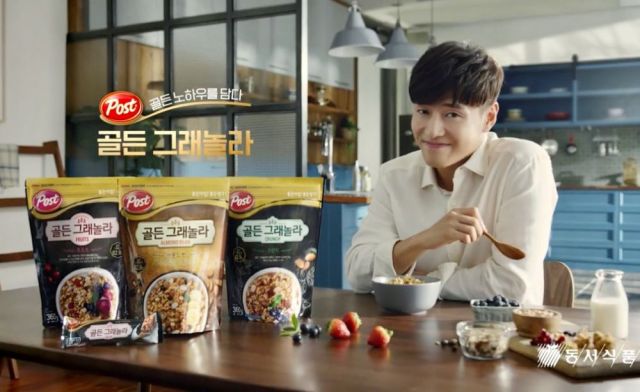 This is Kang Ha-neul's first advertisement after military discharge and apparently, the first of the many products that he will be endorsing after his successful portrayal of Hwang Yon-sik in the recently concluded hit drama "When the Camellia Blooms".

Golden Granola boasts as being a healthy and nutritious breakfast cereal that comprises of 82.8% granola clusters. It comes in three flavours: fruits, crunch and almond bean. Golden Granola retails in Korea for approximately 5,700 won for a 360 gram bag and it's also available for international distribution in various online shops.

Past endorsers of Golden Granola are Kim Ji-won and Nana.

"Kang Ha-neul Becomes the Face of "Golden Granola""
by HanCinema is licensed under a Creative Commons Attribution-Share Alike 3.0 Unported License.
Based on a work from this source