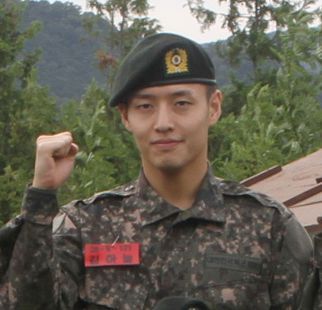 The photo, where he is seen wearing his military uniform, was published at the website of the Korea Army Training Center on September 19th. Kang Ha-neul was in a group photo with his comrades in the 28th Regiment, 9th Company, 3th Platoon.

After basic training, Kang Ha-neul will be dispatched to the Republic of Korean's Capital Defense Command as a military police whose main duty is to escort and protect high level military officials and VIPs. He is scheduled to be discharged on June 10, 2019.

Meanwhile, "Midnight Runners", the actor's last movie before enlistment, is currently South Korea's 4th top grossing domestic film in 2017. As of September 20th, the action comedy film boasts of 5,648,099 admissions and US$39,101,412 gross earnings. The movie premiered in South Korean in August 9th.

"Midnight Runners" has been released in the United States, Canada, United Kingdom, Australia, New Zealand, Viet Nam, Indonesia, Hong Kong and Singapore. It is scheduled to be screened in Malaysia on October 5th and in the Philippines on November 22nd. Taiwan and Japan will also see the movie within the year.

The film, known for the strong chemistry between the two leads, follows two police academy students, Hee-yeol (Kang Ha-neul) and Gi-joon (Park Seo-joon) who embark on a journey to save a young woman who was abducted in front of their eyes. The was penned and helmed by Kim Joo-hwan and distributed by Lotte Entertainment.

"Kang Ha-neul's first official military photo revealed"
by HanCinema is licensed under a Creative Commons Attribution-Share Alike 3.0 Unported License.
Based on a work from this source