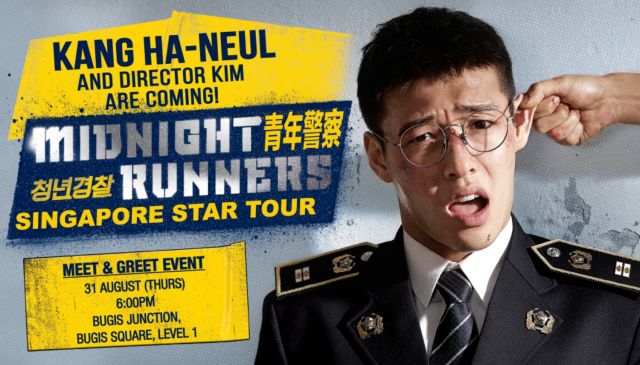 On August 31st, Kang Ha-neul, together with director Kim Joo-hwan, will attend the Meet and Greet event for hit movie "Midnight Runners". It will take place at 6pm at Bugis Junction, Bugis Square Level 1.  This will be followed by a closed door gala premiere at 7:30 pm at Golden Village Cinema, Suntec City Mall.

According to Purple Plan, the movie's distributor in Singapore, "Midnight Runners" will open in cinemas on September 7. The list of venues will be made available soon.  The movie will be released with Korean audio with English and Chinese subtitles, as shown in the official trailer below.

The action comedy film tells about the story of two police academy students who launch an amateur investigation of a kidnapping that they witness by chance one night. It stars Kang Ha-neul as Hee-yeol "Mr. Book Worm" and Park Seo-joon as Ki-joon "Mr. Action".  The film is enjoying popularity in South Korea and has exceeded 4 million admissions within 13 days from its release on August 9th.

"Midnight Runners" is currently showing in Viet Nam and Indonesia. It will be screened in the US and Canada from August 25th, followed by Hong Kong, Australia and New Zealand on August 31st and the United Kingdom on September 1st. It will also be in released in Japan, Malaysia, Philippines and Taiwan in the near future.

"Kang Ha-neul will visit Singapore for "Midnight Runners""
by HanCinema is licensed under a Creative Commons Attribution-Share Alike 3.0 Unported License.
Based on a work from this source