Kang Ho-dong to Return to Showbiz 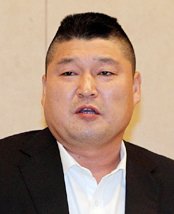 TV personality Kang Ho-dong will return to showbusiness with SBS' entertainment program "Star King", after he withdrew from all the shows he hosted due to a tax scandal, the broadcaster said Thursday.

The dates when the first episode will be recorded and aired have not been confirmed. Kang hosted "Star King" from 2007 until he was forced to leave the show after the scandal in September 2011.

In August, he signed with SM Entertainment and announced his impending comeback.

"Kang Ho-dong to Return to Showbiz"
by HanCinema is licensed under a Creative Commons Attribution-Share Alike 3.0 Unported License.
Based on a work from this source