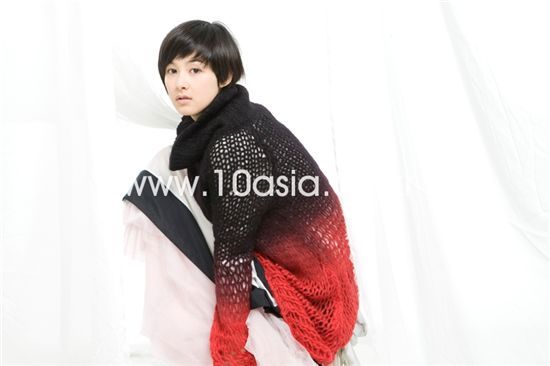 Kang Hye-jung has experienced quite a curve during her career as a movie star. The unpredictability in her career shows how eventful the journey was from her starting point leading up to the present. Watching her play the role of Yuki in her debut film "The Butterfly" -- it was directed by Moon Seung-wook and showed Kang's potential as an actor -- makes it hard to think of anyone better for the part. The film "Old Boy", which implanted her name in peoples' minds, also falls into the masterpiece category. Her character Mido in "Old Boy" proclaimed that Kang cannot be fit into a stereotype that had been established by previous Korean actresses and Kang earned a name value of her own. She continuously used that value in her consequent movie roles -- as the beautiful wife of a kind-hearted filmmaker in "Three, Monster" and portraying the character Hong in the impossible-to-describe film "Rules of Dating". Kang Hye-jung was an intense actor and her movies were like powerful punches on the hearts of moviegoers.

After the film "Welcome to Dongmakgol", however, Kang little by little started going off the predictable path that public expected her to take. She played the adorable and cute girl parts in "Love Phobia", "Herb" and "Kill Me" -- also something the public did not expect to see from her. And in the film "Girlfriends", she played the ordinary twenty-something woman who goes through growing pains at the age of twenty-nine. "I actually went through some things that other people have not experienced or need not experience pretty early in my life. And I was able to create an aggressive and independent character in my early twenties based on such experiences. I was a kid who either ignored pain or let it burst, like my characters in "Old Boy" and "Rules of Dating". But after a while, the ups and downs in my life started getting less frequent and less noisy".

One may question Kang's choices of roles upon looking just at her filmography but her movies had actually followed the traces of her life. The "anxious" girl who during her stormy, early twenties "had a lot to let out" has now passed the "calming" phase and is entering the turning point in her life as the wife of a man and the mother of a soon-to-be-born child. Here, Kang Hye-jung recommends beautiful movies that either resembles winter or warms cold hearts in the wintertime.

1. "Love Actually" (2003, directed by Richard Curtis)
"I saw this movie by myself at a movie theater in Jong-ro which doesn't exist anymore. I sat in the first row and it was really sad because everyone else came with their date. (laugh) But around this time of the year, like on Christmas Day, it is not bad to go see a romantic comedy by yourself. I think it would be fun to watch "Girlfriends" alone, like I did. (laugh) My favorite episode in "Love Actually" was the one with the Portuguese woman and English writer. When the actress first appeared on the screen I didn't find her very attractive, but then I gradually started noticing her more and more. Then when she answers "Yes" in English when the man proposes to her, wow, she looked so beautiful at that moment. I felt like such moments were the subtle beauty of film for actresses".

Is there a movie that is more perfect for winter and Christmas than this film? The seven couples in the film are either sharing their love with each other or experiencing a hurt in their long relationship around Christmastime. As some couples bear the fruit of their romance while others shed tears, you will find yourself smiling watching these people who make up stories as cheerful as Christmas carols.

2. "Notting Hill" (1999, directed by Roger Michell)
"This is a similar romantic comedy film but a little different from "Love Actually", isn't it? "Love Actually" tells many stories that each move you in a different way, because the director wanted to bring together the most beautiful love stories in the world and show them all in one movie. "Notting Hill", on the other hand, takes the story of one man and one woman in a long take but it is also touching. I especially liked the music in the film and I keenly realized how important the correlation between movie and music was. Watching Hugh Grant walking on the streets and seeing the seasons change on the screen while "Ain't no sunshine" plays in the background -- that was more beautiful than any movie that I have seen recently".

"Notting Hill" is a masterpiece of romantic comedy, the biggest hit film of production company Working Title before "Love Actually" came out. The love story between the ordinary man and the endlessly radiant lady is a modern twist of the typical romance -- often represented by the Prince and Cinderella -- which was adapted into a romance between a Hollywood actress and a bachelor bookstore owner. The happy ending between Hugh Grant and Julie Roberts, who may be past their young, prime years but shows what mature beauty is, melts our cold frozen hearts.

3. "Be Kind Rewind" (2008, directed by Michel Gondry)
"When my husband is hooked on something, he gathers all the information from everywhere and tells me about it. (laugh) I found out from my husband that Mos Def, who appears in this movie, is actually a unique rapper. He is known for doing nice raps just like his nice, decent looks. I think that aspect of Mos Def was reflected in the movie "Be Kind Rewind" because everything about the film -- including Mos Def and Jack Black -- is so adorable. It is a totally unrealistic story but you end up hoping that it is true. And it sort of resembles "Cinema Paradiso" at the ending in that everyone is watching and enjoying the movie that these Two Guys made. (laugh) When I was watching it, I felt like I wanted to make a lovely movie like this one with my husband someday".

Director Michel Gondry, who is known for his exceptional skill in creating adorable characters, has again introduced to the world two of the most off-the-wall, cute and impossible-to-hate characters. Mike (played by Mos Def) and Jerry (played by Jack Black) try to remake all the movies in the video rental store which were accidentally destroyed. Their movie-making stint somehow become the town's biggest project and a movie studio comes looking for them. Old masterpieces including "Driving Miss Daisy", "Back to the Future" and "Robocop" were re-made with the director's unique, minimal touch.

4. "The Hours" (2002, directed by Stephen Daldry)
"I don't need to explain why this a great movie, do I? It is based on a very famous novel by Virginia Woolf and everyone's acting was perfect in the movie. The underlying emotion of the film is very depressing, but I think that worked best with the message that the movie tried to deliver. Actually, I can't point out exactly why it is so great, I just like the ambiguity of this film. You feel lonely and ambiguous after watching the movie, you know? I get depressed every time I watch it but I like that. Nicole Kidman's nose looks so funny every time I see it too. (laugh)"

Meryl Streep, Julianne Moore and Nicole Kidman. Watching these three incredible actress together in the movie is enough to fill our appetite. But one will find himself amazed by Stephen Daldry's directing skills as the movie randomly goes back and forth among three women's lives, as if following the flow of consciousness, which get weaved into one thread at the end.

5. "The Reader" (2008,directed by Stephen Daldry)
"I actually didn't have a particularly strong impression of Kate Winslet. Oh, maybe just that she was the girl in "Titanic". But I was looking through her filmography one day and it was unbelievable! I was very surprised to see that she was such an influential actress. She had been away from the screen for a long time and then she appears in "The Reader" and wow, it was truly remarkable. She plays an ignorant character who seems to have a obsessive compulsive disorder and even talks strangely, but she looked so beautiful. The talented actors have a certain fixed image but Kate Winslet shattered all that in this movie".

Michael (played by David Kross) and his first love Hanna (played by Kate Winslet) meet again at an unlikely place after Michael has grown up from being a boy into a man. Michael (played by Ralph Fiennes), who refuses to remember his memories with Hanna after their shocking encounter, reaches out to her again when he becomes about as old as Hanna was when she first met him. The voice of the man who reads her a book, which was first heard years ago in intimate romantic talks, sounds off into the world as a positive note of forgiveness and of life. 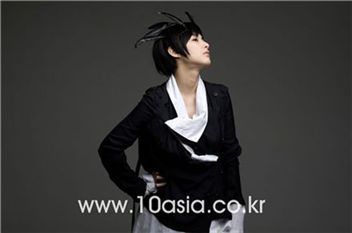 "I felt stifled for a time, wondering if there were any roles left that could take me or release. I had emotions that I had not yet release but I couldn't jump up and down like a crazy person. But I am trying not to rush myself because it is not too late to worry after I have done everything that I can do. Won't the answer come to me one day if I just live with the problems that I have and not obsess over getting the answer right away?" Like her character Song-yi in the film "Girlfriends", who finds that everything in her life has changed when she turned twenty-nine, Kang Hye-jung is also standing in the midst of the biggest changes in her life. She has created her own family and has, in her own words, "softened a lot since meeting [her] husband and getting pregnant". But unlike her softened appearance, the burdens that an actor must carry is not soft in the least. The former Kang Hye-jung, who was conflicted between the public's expectations and her personal growth, would have performed the kind of "crazy, jumping" acting. But the older and aging Kang Hye-jung is catching her breath under the calm waters, rather than being swept away by the waves. Perhaps Kang Hye-jung is the process of transforming into her true self, like a butterfly who becomes closer to her true form the more she goes through metamorphosis.

"Kang Hye-jung's Movie Picks"
by HanCinema is licensed under a Creative Commons Attribution-Share Alike 3.0 Unported License.
Based on a work from this source