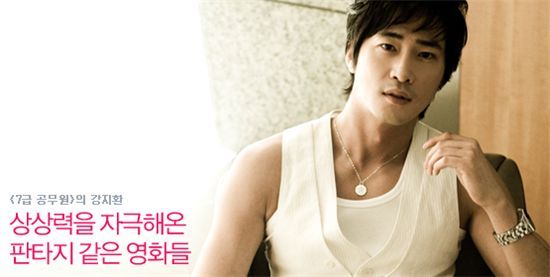 There are usually two ways that male actors can have a competitive advantage on television and movie screens. He can be drop-dead gorgeous or have drop-dead fantastic acting skills. Of course, not all actors fulfill either one requirement completely, but in most cases one could tell how much an actor satisfied each requirement. But what makes Kang Ji-hwan interesting is that one cannot quite discern exactly how handsome or how great of an actor he is.

Of course, Kang Ji-hwan has an attractive smile and is a very detailed actor. But his appeal comes from that certain something that goes beyond good looks and good acting skills. In other words, there are other actors who are more attractive and more talented than he is, but one cannot easily think of any actor that is better suited for roles in the following movies -- Hong Gil-dong in "Hong Gil-dong", Sunwoo Wan in "Capital Scandal" and Jae-joon in "My Girlfriend is an Agent". This isn't simply because he played these characters well. For parts like Hong Gil-dong, who trudges around with a knapsack and a pole, and the cheesy, immature Modern Boy who is busy seducing women in a midst of societal chaos [in "Capital Scandal"), Kang's looks and acting are a perfect fit for making such comic book-ish characters come to life. Few actors can pull off a really difficult role but it is just as rare to find an actor like Kang, who can play around with interesting characters. So it comes as no surprise that Kang would recommend such comical, imaginative movies as below.

The following is a selection of films that have stimulated Kang Ji-hwan's imagination. One movie offers a stunning visual spectacle while another stands out in its uniqueness in dealing with subjects from everyday life. Like Kang's acting, which add a realistic touch to otherworldly characters, these movies break the boundaries of reality and offer viewers the fantasy.

1. "King Kong" (2005, directed by Peter Jackson)
"I went to see this movie at the theater with a friend and I literally could not help cheering. Watching those people who went to Skull Island to shoot a movie and seeing them fight against dinosaurs and big bugs there, it was like a never-ending adventure. One particular scene where King Kong fights the dinosaurs who were threatening the life of the beautiful woman, that scene was as intense as any action movie. But I don't mean that the genuine love story in the second of the movie was boring. Actually, it was the first time that I was able to empathize with the emotions of an animal, not a human being, while watching a movie".

The loyal fans of director Peter Jackson who have watched all of his films might feel dizzy looking at a certain difference in his filmmaking. First, there is the Peter Jackson made movies like "Bad Taste" and "Braindead" that were full of poor-quality special effects and cheap, B-level sentiments. Then there's the Peter Jackson who made the "Lord of the Rings" series which fully deserve to be called the classics of the 21st century. In short, "King Kong" is a movie that combines characteristics of two different Peter Jacksons. On the outside, the movie shows typical traits of a big blockbuster movie but it was Peter Jackson's unique sentimentality in telling the story from King Kong's perspective -- of wanting to protect the female character Ann (played by Naomi Watts) -- that made the "King Kong vs humans" showdown feel like a touching story rather than a mere spectacle.

2. "Edward Scissorhands" (1990, directed by Tim Burton)
"Sometimes I remember a movie by a certain feeling I get from it and I remember "Edward Scissorhands" because of Johnny Depp, or more precisely the sad eyes of [Depp's character] Edward. It made me so sad that although he was more warm-hearted than anyone, he couldn't touch or pat anyone because he had cold scissorhands. It was the first movie that Tim Burton, who is fantastic at expressing fairy tale-like imaginations, made with Johnny Depp, who could be Burton's person and I think "Edward Scissorhands" was their best work together among other films like "Sleepy Hollow" and "Charlie and the Chocolate Factory". I still get excited about films that they make together and that's why I'm looking forward to see "Alice in Wonderland'".

The fairy tale romance film is best remembered for the scene where Edward Scissorhands (played by Johnny Depp) carves ice and makes falling snow. The cynicism typically seen in early Tim Burton movies is apparent here, with the description of snobby neighbors who show false pity toward Edward and who try too hard to meddle with his life. The beautiful romance between Edward and Kim (played by Winona Ryder) is depicted as something that is possible for two innocent souls who are free from conventional rules and morals of society. This is what makes this film a true fantasy.

3. " Secret " (1999, directed by Takita Yojiro)
"I fell in love with the female character Hirosue Ryoko while watching this movie. It was similar to the Korean film "Addicted", which starred Lee Byung-hun and opened around the same time. The story itself was a little bit of a cliche. But the actors were very delicate in expressing their [characters'] worries and conflicts regarding sensitive issues like sex, and I think that helped give strength to what could have been a corny story. I'm sure a lot of people know it by now but I remember I was so heartbroken when I first saw the shocking ending".

The film is based on a popular mystery novel by Japanese writer Higashino Keigo, who also wrote the book that was recently made into a Korean film "White Night". The story begins when mother Naoko dies in a bus accident and her spirit enters the body of daughter Monami (played by Hirosue Ryoko). As the father (played by Kobayashi Kaoru) watches his mother/daughter grow up, the movie questions what love is by showing his conflicts about the situation and his choice to live his life as a father. The daughter's consciousness returns in the second half of the movie and the ending may be predictable for avid mystery novel readers, but it doesn't diminish the sorrow of the shocking ending.

4. "The Truman Show" (1998, directed by Peter Weir)
"After I watched this film, I kept looking around because I believed the same thing could happen to me. As an actor, I'm supposed to reveal myself to people so sometimes parts of my life that I want to keep hidden do get exposed regardless of my intention or will. So you could say it's a job that comes with both cheers and stress. "Truman Show" twisted this concept and showed an average salary man who is actually the star of the most popular show in the world".

Near the end of the 20th century, there were many movies that questioned if what we saw with our eyes was real or not. Films like "Matrix", "Dark City" and "The Truman Show" were such examples. But if the first two films took that question to the extreme and made a science fiction movie out of it, "The Truman Show" accused the power of the media by showing voyeuristic traits of television and its power to control a person's life. Several years later, when the popularity of reality shows flooded televisions all over the world, including Korea, it showed that such accusation was not unfounded.

5. "I Am Legend" (2007, directed by Francis Lawrence)
"Will Smith is an actor who never disappoints, from "Men In Black" to "I, Robot" to "The Pursuit of Happyness". And he didn't disappoint in this film "I Am Legend" and I think it's a movie that satisfies all five senses. The war between virus-inflicted mutants and Will Smith as the last survivor of mankind is so intense that it made me feel like the movie was only an hour long. Will Smith's acting was the best -- he did incredible fight scenes and still showed the anxiety [of his character]".

I am the last survivor of the mankind. And all the other survivors have turned into vampires. Such set-up is enough to scare viewers of the movie, which was based on a horror story of the same title. The action scenes between scientist Neville (played by Will Smith) and mutants, and the film's visual description of deserted future cities make "Legend" a solid blockbuster movie. However, fans of the original book criticized the film's ending as being "too Hollywood", especially the last fight scene against mutants which re-defines the concept of "legend".

"I was bewildered when I first read the script. There were lines like, 'Oh, my dear goddess'", Kang's last film "The Relation of Face, Mind and Love" is the only romantic comedy among a series of telecinema projects, co-produced by a Korean director and Japanese writer. It has the typical, comic book-ish elements of a Japanese drama -- a man who gets in a car accident and starts seeing unattractive women as attractive. Even though Kang confesses that he felt very awkward delivering such lines, it is hard to find an actor better suited for the role which calls for a handsome male who can look serious when calling the "ugly" Lee Ji-ah by the term "goddess". Like I said, Kang is not the most handsome nor the most talented actor. But he has played roles that are unique to his character as an actor and thus we have far more interesting films that we can enjoy watching him in. That is probably the biggest harvest that artistic creators and audiences have gained from an actor called Kang Ji-hwan.

"Kang Ji-hwan's Movie Picks"
by HanCinema is licensed under a Creative Commons Attribution-Share Alike 3.0 Unported License.
Based on a work from this source