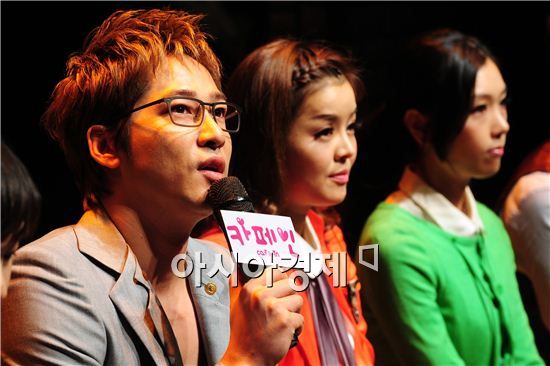 Actor Kang Ji-hwan, producer of upcoming musical "Cafe In", has said he will take part in the production also as a member of the cast when it shows in Japan.

Kang made the remark during a press conference for the musical in Seoul on Tuesday, saying he will be the producer for the show's run in Korea but both producer and actor for its run in Japan.

Kang was not included in the Korea show from lack of practice -- his drama "Coffee House" ended its run last just last week, keeping him from participating often enough in rehearsals for the musical.

The actor admitted he had not been able to practice enough but added, "I will rehearse hard so that I'll be able to go on the stage in Korea too although there are no definite plans for it as of yet".

Kang expressed his hopes for his new endeavor as a producer for the meantime, saying the musical "must do well" as well as half-jokingly asking photographers at the press event to take many photos for publicity.

He explained that he decided to take part in the show as producer after hearing it was a strong production and with the thought that he could show a performance which was different from plays and musicals put on so far.

"I had always had a lot of interest in musicals but had not been able to take part in one because I thought I wasn't good enough", Kang said humbly. "But I liked how it was a two-man play -- it was refreshing that two people would tell the story for 100 minutes".

"Cafe In" is about the love story between a sommelier and a barista whose ex-boyfriends get married to another woman as soon as they break up with her.

Starring Yoo Na-young, Kim Tae-han, Woo Geum-ji and Kim Kyung-soo, "Cafe In" runs at the Art One Theater from August 4 to October 3. In Japan, the musical will show a total of 23 times, from October 16 to November 7.

Kang made his debut in the entertainment industry through popular musical productions "Rocky Horror Show" (2001) and "Grease" (2004).

"Kang Ji-hwan says will act in musical "Cafe In" Japan show"
by HanCinema is licensed under a Creative Commons Attribution-Share Alike 3.0 Unported License.
Based on a work from this source