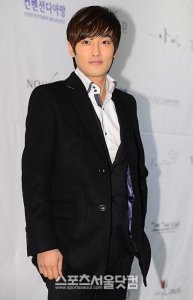 Singer Kangta, whose popularity spans all Asia, has finalized a role in his second Chinese drama, which will soon begin shooting.

The Chinese media on Tuesday said the teen drama series is called Namjaeyeomo in Korean, meaning "ability" for men and "beauty" for women. The Korean singer's first acting gig in China was two years ago.

At a Tuesday presentation of the drama in Hangzhou, Kangta expressed joy regarding his second drama and his wish to become a more beloved actor.

Kangta will play a talented heartthrob who is adored by many women but eventually chooses an ordinary girl.