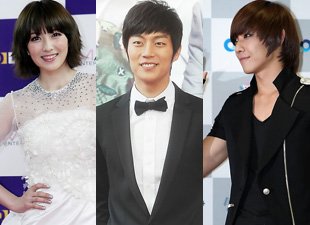 Some of the most popular idol stars have just joined the cast of the blockbuster drama sequel "IRIS 2".

According to drama officials, Kara's Kang Ji-young, BEAST's Yoon Doo-joon, and MBLAQ's Lee Joon will be taking on roles as agents in the drama.

Kang Ji-young will play a honest and confident agent character named Song Chae-ran, Yoon Doo-joon's character will be a cool agent named Yoon Shi-hyuk, and Lee Joon's role will be that of a talented password hacker named Kim Ji-hoon.

Also, actress Im Soo-hyang from the "New Gisaeng Story" will be playing an assassin employed by the Russians.

One drama rep also revealed a couple of other names being considered for some of the older roles: Baek Yoon-sik, Im Ha-ryong, Jang Hyuk, Lee Da-hae, and Daniel Henney.

"IRIS 2" is expected to air at the beginning of 2013. The storyline will pick up from where the first drama left off: after Lee Byung-hun's character dies.