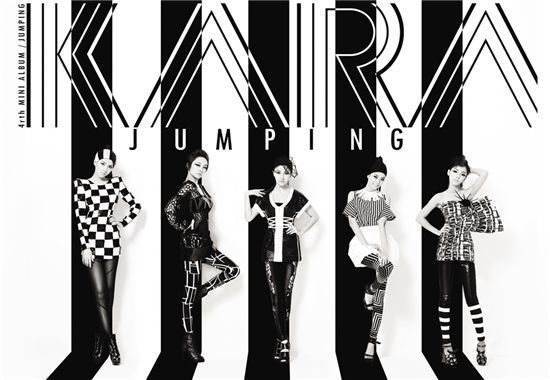 The music video for "JUMPING", the song an 80s pop euro-track by duo Han Jae-ho and Kim Seung-soo, features the girls donning black and white op-art clothes in accordance to the concept of their new album.

While the girls will promote "JUMPING" in Korea and Japan simultaneously, the Japanese version of the album, to be their second mini-album in the country, was released today and the Korean edition as their fourth mini-album on November 16.

Composed of members Gu Hara, Han Seung-yeon, Park Gyu-lee, Kang Ji-young and Nicole, Kara made their debut with their first album "Blooming" in 2007. They are known for their hit songs "Mister", "Wanna" and "Lupin".

Kara is the first Korean girl group to have officially kicked off their singing career in Japan, signing with Universal Music Sigma, a branch of Universal Music Group, and releasing their Japanese single "Mister" in August.

"Kara unveils full length music video for "JUMPING" today"
by HanCinema is licensed under a Creative Commons Attribution-Share Alike 3.0 Unported License.
Based on a work from this source