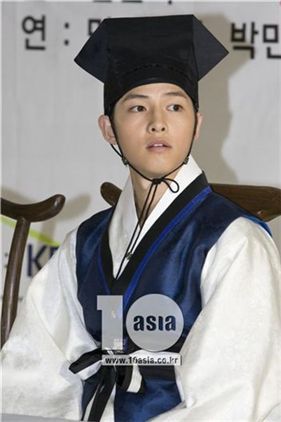 Q: There is a bed scene between Seon-joon and Yoon-hee towards the latter half of the original novel "Sungkyungkwan Scandal". Should we be looking forward to that scene in the drama?
Park Yoo-chun: I'm guessing only the bed will be shown since it's a drama. (laugh) I'm sorry, the crew has told me to stop making these nonsensical jokes.
Everyone: (Stands up) We are sorry.
Park Yoo-chun: Anyway, I think it would be difficult

Q: Then can we look forward to seeing you three male characters bare some skin?
Park Min-young (Park): You must've seen us filming a few days ago. (laugh) We shot a skin baring scene two days ago. It's the scene where Seon-joon and Jae-shin both change out of their clothes thinking that Yoon-hee is a man and I noticed that they both [Yoochun and Yoo] didn't eat anything before going into shoot for that. But the director said something after seeing Yoochun's body. (Looking over at Yoochun) Should I not say it?
Park Yoo-chun: ... (Steals the microphone.)
Park Min-young: (Takes back the microphone) The director said "Don't they make the members of TVXQ work out? Don't they make you get into shape?" That's how slim a physique he has maintained. On the other hand, you have Yu who plays a rough and wild character but changes with time. His face gradually becomes darker and his body becomes slimmer. He's the person that exudes the most becoming figure on set. But I'm not saying that Yoochun has a bad body. He has the body of an rich and elegant person. (laugh) I like Park Yoo-chun too! (laugh)
Yu: I worried a lot because my original body frame wasn't that great and for a rough and wild character, a six-pack and muscles are a given. So I was relieved after seeing Yoochun's body. (laugh) Honestly, there is pressure to being called rough and wild. That is why I'm in the process of pulling out more of the rough and wild characteristics from within me. (laugh)

Q: Park, you have gotten to work with three goofy pretty-faced guys. What is the image you have of them from on set?
Park Min-young: You're asking me a risky question. (laugh) I was the last one to be cast and I was worried whether they'd be able to pull off their characters because they look so innocent and pretty. But once they put on their wardrobe, I saw that they looked better in them than I expected. In the drama Yoochun comes out as a clean-cut and wholesome guy. He always manages to lie down in an upright position and whenever he looks at someone, he will look into that person's eyes directly. It's as if he was born to act. Yu is actually a sentimental person but when we begin shooting, he will put on this piercing look. Everyone is doing well. I guess the main issue is whether I have the potential to pull off my character.

Q: What was it like to play a woman disguised as a man?
Park Min-young: It has both its advantages and disadvantages. In my previous project, I played a princess but now I get to wear more comfortable clothes so I get to sit down whenever I want and I can also roll around while lying down. But it's very hot because it is summer and I'm wearing bandages to hide the fact that I'm a girl. Another con is that I have to stand on a platform while we are filming because I'm short. (laugh) I feel that I'm losing my identity as the shoots go on. The crew treats me like a guy too. (laugh) 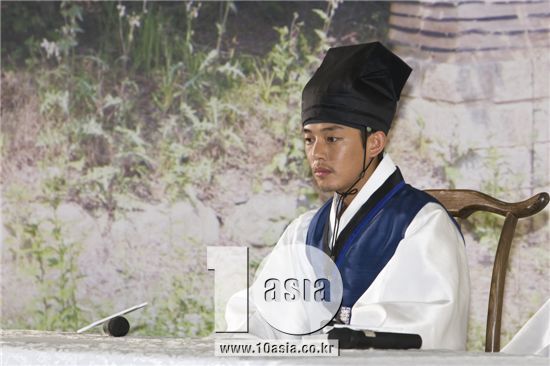 Q: You must've felt pressured to play your role somewhat differently because a lot of dramas have been about women disguised as men.
Park Min-young: I myself have enjoyed watching such dramas so I'm well aware of the fact that because this is about the frequently used subject of a girl in disguise as a guy, it could easily become boring for viewers. "Sungkyunkwan Scandal" is about how one person achieves her dream after overcoming numerous obstacles during the Joseon Dynasty so I'm trying to deliver a certain sincerity by focusing on Kim Yoon-hee as an individual, rather than someone in disguise.

Q: You must have a hard time shooting a historical drama due to the hot weather.
Park Min-young: Unlike what they look like, these three men here sweat a lot. To the extent that I can see sweat running down their faces when they've shot just one scene. It takes much more time for them to wipe off their sweat than to shoot the scenes. That's why Micky calls our drama "Sunkyunkwan Sweat-candle". (laugh) Ridiculous jokes like these are overplayed on set. [Looking at Micky] You have something to say?
Park Yoo-chun: Park is scared of bugs but she's good at catching them. Hmm, maybe this isn't it.
Song Joong-ki: That's not what it's like. Park caught bugs? I didn't know. Anyway, we need to say something fun, not say things like these. [Toward reporters] I'm very sorry but from now on, if you direct the question to me, I will hear Micky's answer first and then translate it for you. And I would like to say one more time that I love Park Yoo-chun. (laugh)

Q: You're still in the early stages of shooting the drama but you all seem very close. Maybe it's because you're in the same age range?
Park Min-young: The first time I went for script rehearsal, Yoochun immediately said we should speak in lower form. [Koreans use honorific form to people older than them or new people. And I just thought, oh okay, and started talking to him in the lower form. And we've become really close because we shot a very romantic scene from the very beginning. I was acquainted with Joong-ki because we're in the same agency, although I wasn't close to him, so I called him 'oppa' [term Korean women use to refer to men older than them] at first. But he told me to treat him comfortably since we're the same age so I call him 'Joong-ki jjang.' So I think I've become close to them much more quickly because of how I've been speaking to them in the familiar form, although I'm developing a love and hate relationship with Yoo because he hit my bottom in our first scene together. (laugh) We're so busy chatting away on set that the director has to tell us to concentrate.

Q: Could you each say a line which best describes the drama?
Song Joong-ki: I can't remember then line I said for the shoot at 10 this morning. What was it… Ah, it was the scene where Sun-joon enters Sungkyunkwan. I say, "Congratulations on getting in, Lee Suk-joon" which actually contains a lot of meanings.
Park Yoo-chun: Sun-joon thinks Yoon-hee is a guy so he says indifferently, "Take off your clothes". (laugh)
Park Min-young: Then this is how I answer. [Turns to Micky] What?????
Yoo: And then this is what I say after I go into the room they're in. "Get lost! I said get lost!!!" 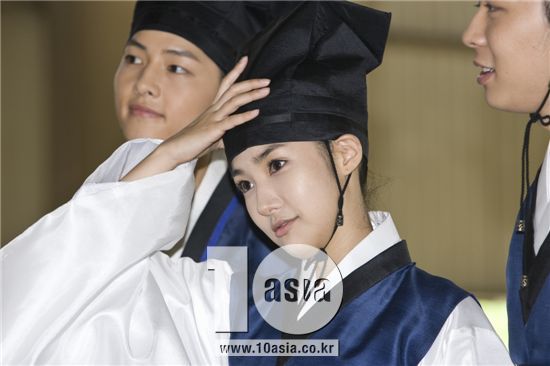 Actress Park Min-young fixes her hat at a press conference for upcoming KBS TV series "Sungkyunkwan Scandal" held at the show's set in the city of Hwaseong in Gyeonggi Province, South Korea on July 15, 2010.