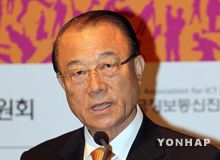 Choi stressed the importance of the raise during a TV forum on Friday, saying the hike for the public broadcaster is an urgent issue.

The KCC chief also clarified that the commission will stick to the current policy on comprehensive programming channels. He added that the government will provide active support for selected newspapers to successfully launch the channels.

Regarding the announced measures to cut telecom fees, Choi asked for the people's understanding, saying the government and the business painstakingly produced the measures despite that the cut seems to be a slightly insufficient.