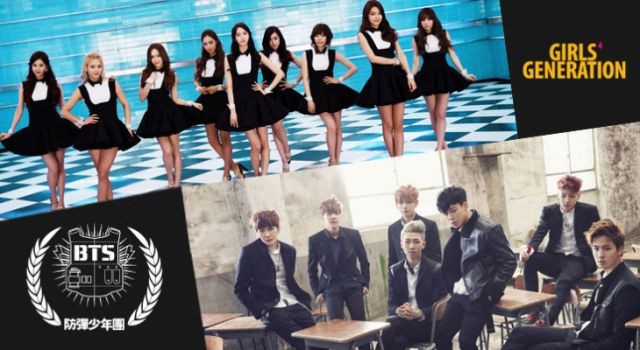 KCON, the largest annual fan celebration of Korean entertainment and culture, continued its tradition of bringing the biggest and most exciting artists to the U.S., by naming Girls' Generation and Bangtan Boys as the first artists added to the two-day convention's concert line-up.

This year's celebration will increase the number of marquee acts spreading the music over two nights, creating two separate outstanding concerts. For a second year in a row, the concerts again will be produced by #1 K-pop chart show, M COUNTDOWN, which is known for drawing the hottest names in Korean pop music. Additional artists will be announced in the coming weeks.

One of the most internationally known acts in Korean pop music, Girls' Generation, also known as SNSD, is a nine member girl group under S.M. Entertainment. Last year, their music video, "I Got A Boy", was named Best Video at the inaugural YouTube Music Awards. Recently the combined views of their music videos on YouTube surpassed the 1 billion mark, joining the ranks of Lady Gaga, Eminem and Justin Bieber. This also makes Girls' Generation the most viewed girl group overall (ever). In February, Girls' Generation released a new single - "Mr.Mr". which has already tallied over 21 million views.

Over 20,000 fans from all across the world attended last year, doubling attendance from the previous year, and KCON is excited to welcome even more fans this summer. For more information and updates on the convention please visit www.kconusa.com.

"With hit content from films to dramas to music, CJ E&M has been instrumental in promoting the Korean wave around the world", said Kim Dong-jun Kim, Head of CJ E&M's Global Festival Division. "As KCON 2014 approaches to greater buzz and anticipation than ever before, we've prepared a larger slate of incredible performances and unique convention activities designed to showcase the inroads Korean pop culture is making around the world".

"For two days, Downtown Los Angeles becomes the capital of Korean pop culture in North America and we are thrilled to be able to bring that ultimate experience to fans year in and year out", said Sang Cho, president and CEO of Mnet America. "We are excited by every expansion that KCON makes as we push our convention to new heights".

KCON 2014, a two-day event, will be packed with activities aimed at giving attendees the unique access that only KCON can offer. Before each night caps off with a star-studded concert extravaganza, fans will be able to fill their days with artist meet-and-greets, photo ops, celebrity panels, contests, fan workshops and gaming competitions. Everyone from the super-fan of Hallyu to those ready to be initiated into the global Korean Wave movement, will get lost in an experience unlike any other in the country. KCON is set to take place on August 9 and 10 in Downtown Los Angeles, California.

"KCON Taps Girls' Generation and Bangtan Boys as First Two Headliners for 2014"
by HanCinema is licensed under a Creative Commons Attribution-Share Alike 3.0 Unported License.
Based on a work from this source