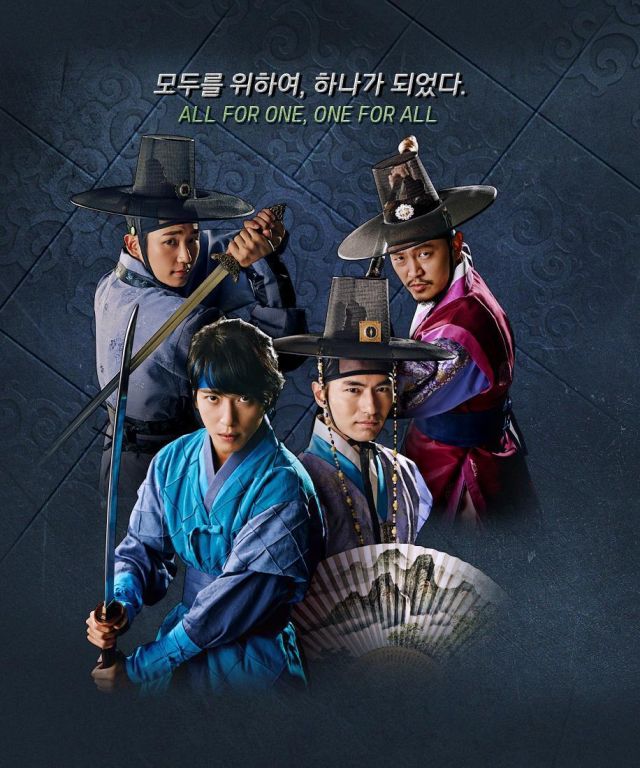 There are only a few actors that have such mass appeal among international audiences that once their name is mentioned for a drama, everyone is prepared to subscribe. Lee Min-ho, Kim Soo-hyun, and Jung Yong-hwa are in that top, elite class (among others of course). So when Jung Yong-hwa was announced to star in TvN's latest drama, "The Three Musketeers - Drama", it was an automatic "must-watch".

Before I share my first impression of the drama, I must come clean about something: I've never read anything about the original "The Three Musketeers - Drama". In fact, I know nothing about the story except that there are, apparently, three men. If you're in the same boat, don't worry! You'll still be able to enjoy the drama - and you don't have to worry about spoiling it for yourself with knowledge of the original storyline!

Jung Yong-hwa playes Park Dal-hyang, a seriously sheltered country boy heading to the Joseon capital, Hanyang, to take his military service exam. He rides perhaps the nation's oldest horse for 2 months to get to the capital - mind you, Korea isn't that big, so you bet he runs into a lot of misadventures to hold him up for that long.

Once he finally arrives in Hanyang, he learns the sad truth about the capital: it sucks. In fact, it seems like everyone there is out to get him - his money is stolen and what little money he saves is used up in one night on inflated housing, where his roommate is beaten nearly to death by a group of thugs - bummer.

But, Dal-hyang shows his mettle by chasing the bandits - intent on justice for his wronged roommate. He runs into three men on horseback and decides it would be a good idea to borrow one of their horses - by hopping onto it behind the rider. Lucky for him, the trio decide to help him out and thus ensues a great, comic-book style whooping of the bad guys.

At the end of the fight, Dal-hyang learns that the trio goes by "The Three Musketeers - Drama" - a moniker created on the fly by the ringleader - played by Lee Jin-wook. The other two "musketeers" are played by Yang Dong-geun, the comic of the group, and Jung Hae-in, definitely the face of the group.

The trio then leaves Dal-hyang behind to investigate the state of the war raging in their neighboring Ming Dynasty. Interesting developments… until one of the musketeers discovers a letter that Dal-hyang dropped, apparently a love letter from the current crown princess. Uh-oh.

Awkward times ensue - including another Dal-hyang/Three Musketeers reunion during which we are able to see how good Jung Yong-hwa has gotten at cry-acting.

To keep from spoiling the episode for you, I'll let you watch it to discover what happens after, but it is definitely a must-watch. From amazingly dry humor and thick sarcasm, to Dal-hyang's endearing but also idiotic naivety, you're sure to be kept both invested and highly amused by this episode. And good news - TvN is so sure of the series success that it has already promised to deliver 2 more seasons after this one! Just from the first episode, I am sure that I'll be sticking it out for all 36 planned episodes - it's that great.

Check out the first episode now and catch a new episode of "The Three Musketeers - Drama" every Sunday evening exclusively on KDrama.com for the US and Canada!

Watch "The Three Musketeers - Drama" on Kdrama
(in North America) "[KDrama.com Spotlight] First Impressions - "The Three Musketeers - Drama""
by HanCinema is licensed under a Creative Commons Attribution-Share Alike 3.0 Unported License.
Based on a work from this source