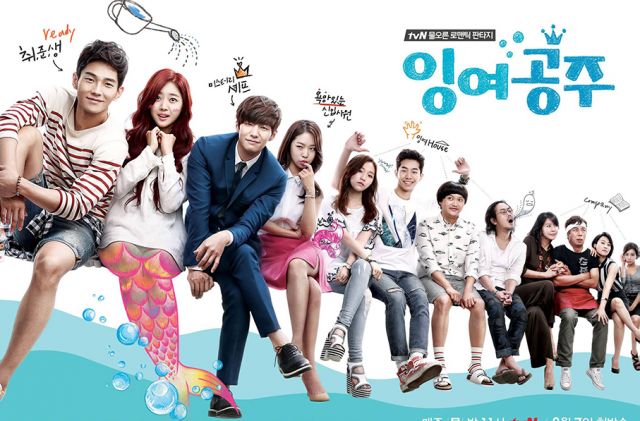 TvN has decided to try something new - a new time slot that is. Rather than their usual Monday/Tuesday, Friday/Saturday primetime drama slots, their newest drama "The Idle Mermaid" is airing only once a week on Thursday evenings.

Described by TvN as the Korean Little Mermaid, there was some eyebrow raising by drama fans at the rather unorthodox genre. There was even more eyebrow raising when TvN announced that members of Saturday Night Live Korea would also be joining the cast. Add heartthrob actors Song Jae-rim, Jo Bo-ah, and On Joo-wan and drama fans were intrigued.

When she manages to gain legs in order to finally meet Si-kyeong, she joins the surface world of 20-somethings desperate to find jobs. In particular, the cast of SNL Korea and On Joo-wan make up a group of unemployed youth living together in the Ingyo House - a place for unemployed people to stay while they are applying for jobs. Except they're not only applying for jobs, they're just desperate for any form of employment.

Where exactly does Arielle fit into this surface world? Well, her first meeting with Si-kyeong as a human does not quite go as planned and instead she bumps into Lee Hyeon-myeong and scars him for life on the banks of the Han River. In the end, her rival in love Yoon Jin-a (Park Ji-soo) positions herself steadfastly Si-kyeong's side and she is forced to leave him empty handed.

So what is she to do now that she's stuck as a human? Well, she has 100 days to either fall in love or disappear into sea foam. And so, she moves into Ingyo House as Kim Ha-ni and has to learn to live her life as a human while she simultaneously tries to win over Si-kyeong.

Only two episodes have aired so far, but the drama keeps things interesting and silly. With references to popular skits from SNL (though you don't have to watch SNL to understand them), seriously laughs, and a great cast, if you are looking for something light to get into, "The Idle Mermaid" is for you!

It only airs once a week, so wait times between episodes are more painful than usual but it is more than worth it! If you live in the US/Canada, check it out every Thursday evening on KDrama.com.

Watch "The Idle Mermaid" on Kdrama
(in North America)