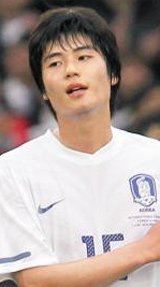 Swansea City midfielder Ki Sung-yueng posted his thoughts about his upcoming marriage to actress Han Hye-jin on his Facebook account on Friday. Ki, who will tie the knot with the actress in July, wrote, "I fell in love with her at first sight and instantly thought of marrying her".

"Things have gone smoothly ever since, and we decided to get married in a flash", he said, denying online rumors that Han is pregnant and their hasty wedding plans have something to do with that.

On having both of their initials marked on his football boots, Ki wrote, "All I wanted to do was show my love for her". He added that he regretted accidentally putting her in the purview of the rumor mill.

Thy first met when Ki appeared on the SBS talk show "Healing Camp", which Han co-hosts, and they announced in March that they were dating. They will wed this summer.

"Ki Sung-yueng Denies Shotgun Marriage"
by HanCinema is licensed under a Creative Commons Attribution-Share Alike 3.0 Unported License.
Based on a work from this source