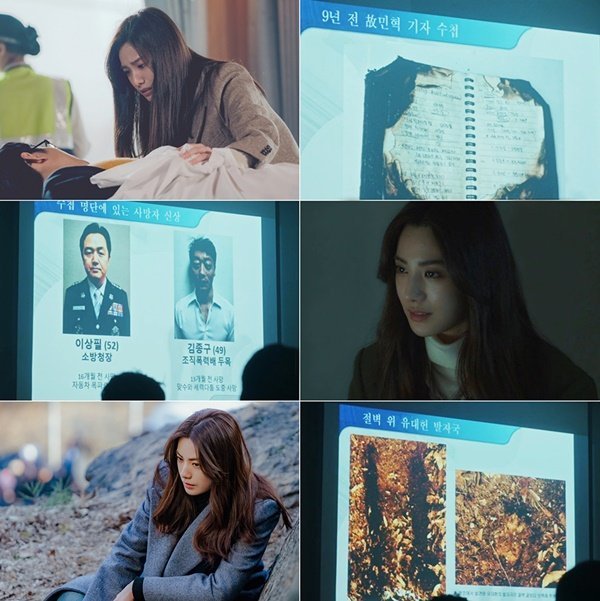 On the latest episode of the OCN drama "Kill It", released some interesting bait such as killer Kim Soo-hyun's (Jang Ki-yong) past and detective Do Hyun-jin's (Nana) case build-up. The drama prompted viewers' reasoning powers and curiosity, making it the new killer contents for the weekends. We take a look at Do Hyun-jin's case log which cover all the facts of the serial murder case.

#1. 9 years ago, death of Min-hyuk the reporter

9 years ago when Do Hyun-jin's boyfriend and reporter Min-hyuk died, she discovered his notebook on the site of his death. The partly burnt notebook had notes like 'people to watch out for', 'Lee Sang-pil', 'gangster Kim Jong-goo', 'Yoo Dae-heon' from Myungsung Distributions and another name that couldn't be recognized. 2 years ago from now, Lee Sang-pil and Kim Jong-goo died 3 months apart from each other. Do Hyun-jin foresaw that Yoo Dae-heon would die similarly to them and became persistent to the investigations.

16 months ago, fire chief Lee Sang-pil died in a car explosion and 13 months ago Kim Jong-goo died in a fight for power. The case remained unsolved as the suspect was released due to insufficient evidence but an unexpected character turned up in the second episode. Do Hyun-jin's father Do Jae-hwa (Jung Hae-kyun) seemed to know something. His assistant told him, "I've been looking for common factors between the deaths of Lee Sang-pil, Kim Jong-goo and Yoo Dae-heon but..." when Do Jae-hwan asked, "Did the ghost of Ko Hyun-woo from 19 years ago come back?" What is it that he knows?

Yoo Dae-heon (Lee Yook-heon) was found dead in the mountains. The police claimed he fell to his death but Do Hyun-jin claimed he was murdered from the tracks that led down from the top of the cliff, signs that show he'd been tied with a rope and traces of drug injection. Just as she said, Kim Soo-hyun had dragged Yoo Dae-heon from the cliff and injected him with drugs to kill him. Do Hyun-jin's sharp analytical power is hinting that Kim Jong-suk (Jin Yong-wook) is not the culprit to the Yoo Dae-heon case.

"Kill It" is a stylish killer action that's on TV every Saturday and Sunday at 10:20PM on OCN.

""Kill It" Nana's Case Log Over 9 Years"
by HanCinema is licensed under a Creative Commons Attribution-Share Alike 3.0 Unported License.
Based on a work from this source