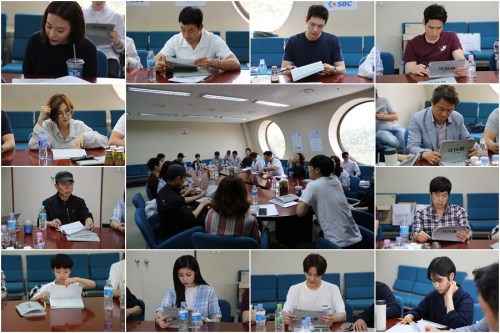 The script reading for the new SBS drama "Wanted" was held.

Directors Park Yong-soon, writer Han Ji-wan-I and the rest of the cast were at the Ilsan Production Center for the script reading of "Wanted". A famous actress carries out a mission delivered by her son's kidnapper on a reality TV show.

This drama is intense like a movie and naturally, it led to the entire cast on the edge of their seats throughout the whole script reading. Kim Ah-joong takes on the role of the mother and she said, "I naturally felt a mother's love for her child when I thought of my son being kidnapped".

Meanwhile, Lee Moon-shik was late to the scene as he is currently in the making of "Jackpot". He was just in time to read his part of the script.

"Kim Ah-joong and Uhm Tae-woong at the script reading for upcoming SBS drama "Wanted""
by HanCinema is licensed under a Creative Commons Attribution-Share Alike 3.0 Unported License.
Based on a work from this source