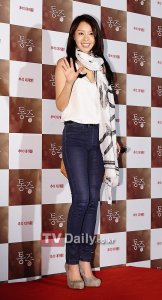 Korean actress Kim Ah-joong had a closed-door meeting with Hong Kong filmmakers while in the territory to promote her latest film "200 Pounds Beauty".

Kim has been in the spotlight during her five-day stay in Hong Kong, conducting interviews with over 150 news outlets.

She reportedly had the secret meeting with the movie makers to discuss a joint Korea-Hong Kong film and possible acting opportunities there.

Local movie insiders praised Kim's attractive appearance and said they believe she has the potential to trigger another Korean wave as an all-around entertainer. "It'd be an honor to work with her in some movies", they said.