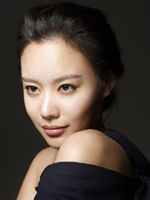 Actress Kim Ah-joong has earned a master's degree in journalism and mass communications from Korea University.

Her agency said that she had poured a great deal of effort into completing the course, and expects the degree will improve her acting abilities.